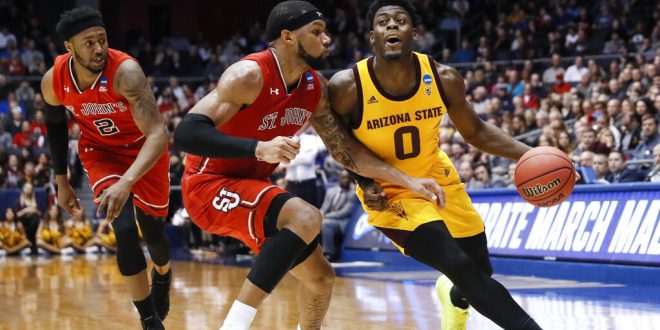 Arizona State lives on to see another day in March Madness, as the 11th seeded Sun Devil’s (23-10) defeated St John’s 74-65 on Wednesday night in Dayton, Ohio. They’ve officially booked their ticket into the First Round of the NCAA Tournament.

This is the first time in 10 years that Arizona State wins a game in the NCAA tournament and the PAC-12’s first win in two years.

To put it into perspective, current NBA MVP James Harden was on the roster back in 2009 when they defeated Temple in the first round. They eventually lost to 13 seed Syracuse.

Arizona State took advantage of the first 20 minutes in the game, going on a 27-9 run and ending on a 35-17 lead with five minutes remaining in the first half.

Sun Devil’s Luguentz Dort was fouled hard early in the game and suffered a leg injury.

Early in the second half, the Arizona State’s point guard went for a rebound near the foul line and a St. John’s Red Storm player crashed into him. Instead of leaving the game, he overcame the injury and eventually dropped a game-high of 21 points on 6-of-11 shooting.

Oh man Dort got up and walked off from this fall. Wow. pic.twitter.com/aQOr6Z00kI

The Sun Devil’s 21 turnovers helped maintain the Red Storm in the game.

Yet, St. John’s couldn’t capitalize on the opportunity. This team was the most efficient offense in team history since 2000. However, they shot themselves in the foot by launching a horrendous 22-for-69 (31.9%) on the night.

Head coach Bobby Hurley has been leading the Sun Devil’s since 2015. His last appearance in the tournament was last year in the First Four against Syracuse, where he eventually lost 60-56 to Syracuse in the same city they just won in.

Hurley was Duke’s point guard from 1989-93, where he went to the tournament all four years and won the title twice in back-to-back years, ’91-’92, before he was drafted to the NBA by the Sacramento Kings in ’93.

Bobby Hurley got back to his #MarchMadness winning ways!

“I loved our effort, how we played in the first half,” said Arizona State coach Bobby Hurley on truTV. “We have to take care of the ball better, so we’ll have to go to the drawing board to clean that up going to the next game.”

The Sun Devils travel to Tulsa, Oklahoma to face 6th-seed Buffalo on Friday in the West Region. The game is set for 4 PM in the BOK Center.

Recent grad from the University of Florida. Editing all articles on here while helping out the newbies. Love all things basketball.
@@MarcoJMartinez_
Previous Heat, Magic win three in a row to keep playoff race alive
Next North Dakota State knocks off North Carolina Central in 78-74 Victory