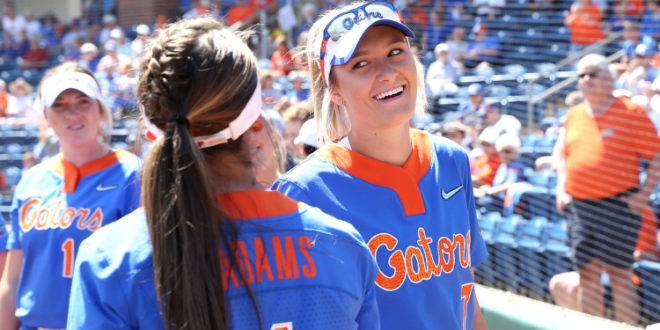 Florida Gators softball (27-6, 2-4) got back on track over the weekend. The team won its third straight game after defeating the Mercer Bears 9-3 on Sunday afternoon.

The series sweep comes after the Gators struggled in two difficult series to open up SEC play.

Longballs By Lindaman and Co.

A season-high four Gators home runs helped fuel the win over Mercer. Danielle Romanello and Jordan Roberts recorded their fourth and fifth home runs, respectively. Kendyl Lindaman took sole possession of the team lead in home runs with two dingers of her own.

Lindaman is on a six-game hitting streak that includes 17 RBIs, three multi-hit games and seven home runs. She said the team knew it was facing another good pitcher in Lynn Gardner and the confidence from Saturday’s game just carried over.

Surprisingly enough, Lindaman said she hasn’t done anything different to cause this offensive outburst. She came back to the confidence she has while in the batter’s box.

Roberts’s home run gave her hits in back-to-back games for the first time since the Bubly Invitational in late February. The junior catcher went 2-for-4 with four RBIs on the weekend.

Walton kept the same lineup from Saturday that featured speedy outfielder Jade Caraway at leadoff and second baseman Hannah Adams in the two-hole.

The duo combined to go 5-for-8 with four runs scored along with a double and triple by Adams on Sunday.

“It helps our lineup a lot because if me or Jade gets on base it’s almost a guaranteed opportunity for us to score with Kendyl, Amanda (and) everyone behind us basically,” Adams said.

Walton also played Jaimie Hoover at third base for the second straight game. Despite an 0-for-3 performance on Sunday she still recorded two RBIs on two hits over the weekend.

Walton on his third basemen:

Florida continues its homestand with a midweek matchup on Wednesday against Bethune-Cookman. The Gators blanked the Wildcats 8-0 in the first game of the 2018 Gainesville regional the last time they met.

After that Walton’s squad will be on the road again for a conference series. This time it comes against the Ole Miss Rebels.