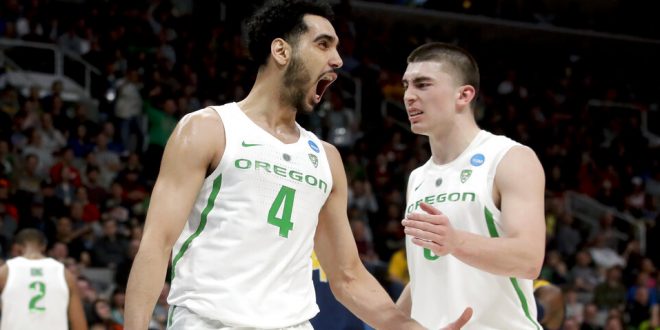 FILE - In this March 24, 2019, file photo, Oregon guard Ehab Amin (4) celebrates after scoring against UC Irvine during the first half of a second-round game in the NCAA men's college basketball tournament , in San Jose, Calif. Ehab Amin is doing his best to make the Egyptian’s lone season at Oregon memorable. The senior who transferred after graduating from Texas A&M Corpus Christi has helped the Ducks reach the Sweet 16 with his energy both on and off the bench disrupting opponents.(AP Photo/Jeff Chiu, File)

Oregon is arguably one of the hottest college basketball teams in the country.

Virginia is arguably one of the most complete.

Both will put it all on the line in Louisville, Kentucky, as they face off in the Sweet Sixteen. The winner will advance to the Elite Eight to take on the either Purdue or Tennessee.

Oregon has yet to lose a basketball game in the month of March. Commanding a 10-game win streak, the Ducks enter the Sweet Sixteen grateful that they’re the only team left in the Pac-12 standing after their mediocre start.

Sophomore forward Kenny Wooten expresses the turnaround Oregon overcame mid-season to get the Ducks where they are in the tournament now.

Even more impressive, Oregon lost 7-foot-2 freshman phenom Bol Bol, son of NBA legend Manute Bol, after just nine games due to a left foot injury that cut his college career short. Bol averaged a near double-double with 21 points and 9.6 rebounds per game in his nine games. However, players like Payton Prichard and Louis King have stepped up in his absence.

Prichard, a junior guard for the Ducks, has taken control of the offense and been the primary weapon for Oregon. Averaging 13 points a game to go with 4.5 assists, Pritchard is Oregon’s offensive key.

If the Ducks hope to outscore Virginia and prevail on the offensive end, Pritchard will be the way they do it. King stepped up in Bol’s absence as an offensive presence inside. The freshman forward is averaging 17.4 points per game in his last five games and is sure to be another force for the Ducks on offense.

Oregon ranks in the Top 5 in defensive efficiency in the month of March. Its defense has been a major factor in the Ducks drastic turnaround. One reason their defense has been so difficult to score on is its length.

Oregon starts four players that stand at 6-foot-9, and turn to 6-foot-5 Will Richardson and 6-foot-4 Ehab Amin off the bench. Coach Tony Bennet anticipates a difficult challenge for his Cavaliers in having to deal with this height on the defensive side of the floor.

The key to stopping Virginia lies with De’Andre Hunter. Stopping Hunter would mitigate Virginia’s top-class defense and hurt them offensively. The problem is stopping the 6-foot-7 sophomore who is a matchup nightmare to deal with.

Coach Dana Altman knows that and has preached to his team to not take Virginia and their star player lightly.

Hunter is a projected Top-5 pick in this year’s NBA Draft and deservedly so. Hunter has the ability to guard any position on the floor while having the skills to cause damage anywhere on the floor. Drawing comparisons to NBA-star Kawhi Leonard, Hunter will need to play smart after struggling in a 10-point performance in the Cavaliers’ win over Oklahoma last round in which he fouled out.