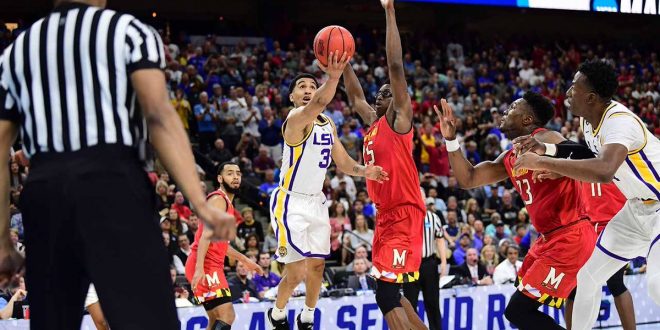 Spartans and Tigers fight for a spot in the Elite Eight

The second-seeded Michigan State Spartans will take on the third seed LSU Tigers tonight at 7:09 p.m. Both teams will fight for a spot in the Elite Eight, but only one can advance.

Spartans back in the Sweet Sixteen

The Big Ten champions are making their 14th Sweet Sixteen appearance in the last 22 years. The Spartans have had great success in this round of the tournament thus far, winning nine of their last 12 games.

The road to the Sweet Sixteen gets a little harder tonight for the Spartans. To get to this point, they breezed past Bradley 76-65 in the first round and demolished Minnesota 70-50 in order to gain a spot in the Sweet Sixteen.

Difference makers on the court for the Spartans are junior Guard Cassius Winston, senior forward Kenny Goins, and sophomore forward Xavier Tillman. Winston leads the team in points with 18.9, assists with 7.6, and steals with 1.0.

Tigers Take it One Play at a Time

The South Eastern Conference champions are trying to make a big statement tonight in their tough Sweet Sixteen match-up against the Spartans. This is their eighth Sweet Sixteen appearance in franchise history.

Their road to the Sweet Sixteen hasn’t been easy but their fight and talent have carried them thus far. In the first round of the tournament, they defeated Yale by a close score of 79-74. In an even closer match-up, they came out on top over Maryland by a score of 69-67 to secure a spot in the Sweet Sixteen.

“It is time, after all that has happened, to give some praise and kudos to players in this program.”@jonrothstein wants the @LSUBasketball players to get some real recognition after this run. pic.twitter.com/7RRP37AC3W

Key Tigers on the court are sophomore guard Tremont Waters, freshman forward Naz Reid, and senior forward Kavell Bigby Williams. Waters leads the team in three categories: points, assists, and steals. He averages 15.1 points, 5.9 assists, and 3 steals per game. Reid leads the team in rebounds with 7.2 and Williams leads in blocks with 1.9.

The Sweet Sixteen match-up between the Spartans and the Tigers will be played in Washington, DC. The game will begin at 7:09 p.m and will be aired on CBS. Don’t miss out on this tough match-up to see who advances to the Elite Eight.