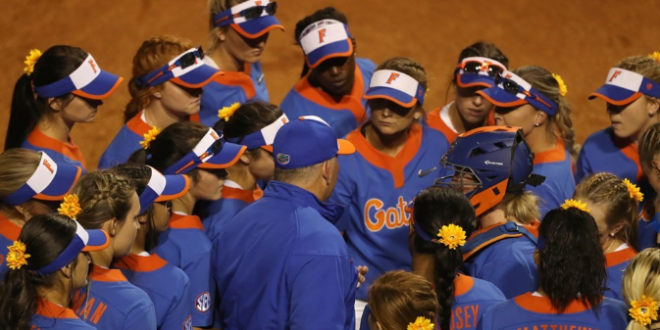 Florida’s softball team (29-9; 3-6) is in the midst of their largest losing streak this season. Granted, three consecutive losses against Ole Miss and Florida State isn’t exactly a catastrophe for head coach Tim Walton and his team.

However, the Gators are still also searching for their first SEC series win. On Friday, Arkansas (26-11; 6-6) will be at Katie Seashole Stadium for Game 1 of a three-game series.

Despite their current losing streak, Florida enters the series with a 27-game win streak over the Razorbacks dating back to April 2007.

One way or another, one of these respective losing streaks will come to an end in the series opener.

Florida’s senior ace, Kelly Barnhill, has pitched in each of the last four games — starting three. The results have been rather mixed.

In Game 1 against Ole Miss last Friday, Barnhill was utterly sensational. She pitched a career-high 15 innings of two-run ball to go along with 17 strikeouts. Since then, she’s struggled heavily with her command.

In the following two games against Ole Miss, she was tagged for seven earned runs in 8.2 innings of work. While four of those runs came off one swing of the bat — Abbey Lantham’s walk-off grand slam on Saturday — Barnhill issued seven free passes to Rebel hitters.

In her start against the No. 3 Seminoles (36-3) in the midweek, she managed to be wildly effective. She limited the visitors to two runs but again struggled with command of her pitches. Barnhill walked four hitters that night and one of them came around to score. That proved costly in the 2-0 loss.

Undoubtedly, Barnhill has earned the right to pitch through her recent rough patch. Although combined with the recent struggles of sophomore Natalie Lugo, Walton’s starting rotation is now scrambling for a sense of consistency.

Both teams in bottom half of SEC-hitting stats

This series may prove a perfect opportunity for Barnhill and the Gators’ pitching staff to dominate an SEC opponent.

Arkansas ranks 12th out of 13 teams in the SEC in runs scored. Yet Florida’s offense has scored just six more runs than the Razorbacks this season.

In SEC play, the Gators’ lineup is averaging just under three runs per game. Their lack of consistent offense against conference opponents has placed a lot more pressure on the likes of Barnhill, Lugo and the pitching staff.

Still, there have been positives in and around the lineup. Outfielder Jade Caraway is riding a nine-game hitting streak atop Florida’s order. Her presence has increased the number of RBI opportunities for senior OF Amanda Lorenz and junior C Kendyl Lindaman. Lindaman herself has mashed 10 of her 12 home runs this season in her last 13 ballgames.

Walton has admitted that he needs “one more hitter behind Lindaman to step up for his team.” If they get one more consistent presence in their lineup, Walton feels his team “can win a lot of big games this season.”

First pitch is set for 6 p.m. ET from Katie Seashole Stadium on Friday. The series will conclude Sunday before USF comes to Gainesville next Wednesday.

Sports media and management student at the University of Florida. Content creator for ESPN 98.1 FM/ 850 AM WRUF.
@TheEdgarChavero
Previous Who will win MVP? Top 8 NBA Players in the MVP Conversation
Next Final Four: Michigan State Spartans Versus the Texas Tech Red Raiders