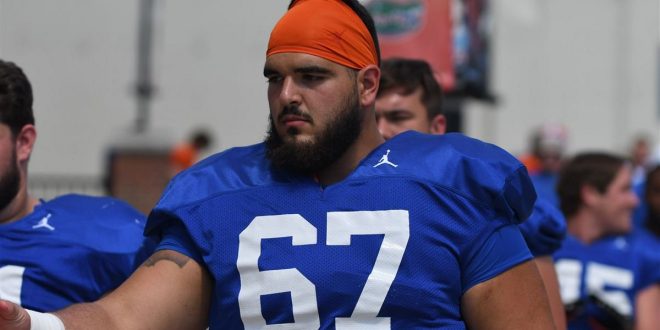 After sitting out his freshman year, Chris Bleich is ready to showcase his offseason work and talent. The Gators lost four out of their five starting offensive lineman from 2018, so Bleich will have an opportunity to make a name for himself in John Hevesy’s inexperienced unit.

Bleich certainly has size on his side. The Pennsylvania native is one of the biggest players on the team, sitting at 6’6″ and 321 pounds.

The redshirt freshman took advantage of his time off the field last year. Bleich was advised to watch and analyze the game day routine of Martez Ivey, who is headed to the NFL after four years with the Gators. According to Bleich, this benefitted him on numerous levels.

He was also mentored by Tyler Jordan, who was a key member of the offensive line from 2015-2018.

Bleich is expected to begin the season in the starting unit, likely at his natural position of right guard. He feels much more confident with a year of college football under his belt.

The development of the offensive line will be a huge factor in how successful the Gators are in 2019.

Bleich knows that his unit needs to step up.

“Just the O-line in general has to step up, from the young guys to the older guys. We need to get it together more and just go over our plays better so we’re not making those stupid mental mistakes that we did today.”

Expectations are extremely high in Gainesville, but if the offensive line can’t hold up, SEC defenses will consistently get to the quarterback.

With a tough opponent in week one, Bleich is aware that the team needs to improve drastically in order to reach their goals for the season.