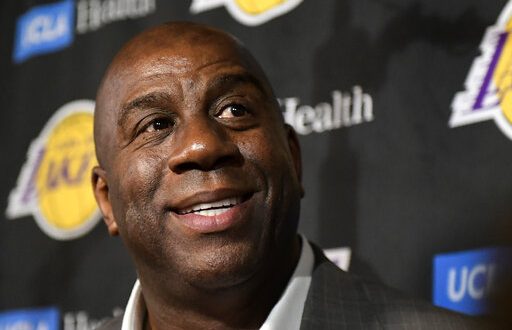 Magic Johnson speaks to reporters prior to an NBA basketball game between the Los Angeles Lakers and the Portland Trail Blazers on Tuesday, April 9, 2019, in Los Angeles. Johnson abruptly quit as the Lakers' president of basketball operations Tuesday night, citing his desire to return to the simpler life he enjoyed as a wealthy businessman and beloved former player before taking charge of the franchise just over two years ago. (AP Photo/Mark J. Terrill)

At least, that’s the main reason Johnson cited when he announced his resignation from the L.A. Lakers on Tuesday night. The organization will now begin their hunt for a new president of basketball operations.

Johnson’s abrupt announcement came via a press conference he held before the Lakers’ final game of the season.

Johnson said that he did not tell owner Jeanie Buss or general manager Rob Pelinka about his decision prior to the press.

The Lakers’ owner tweeted out her reaction to Johnson’s resignation shortly after.

Johnson’s tenure as an executive for L.A. lasted just over two years. He failed to guide his former franchise to a winning season.

Overall, he seemed relieved and almost joyous to be leaving his post. He’s now excited to continue mentoring athletes that seek his guidance.

Johnson stated frankly that he “had more fun on the other side than on this side.”

While Johnson is undoubtedly a Laker legend, his time as an executive was tumultuous to say the least. Despite helping lure Lebron James to Los Angeles last summer, the Lakers roster still remains in a huge state of flux.

Ten players on their roster will be free agents at the end of this season. Their young players like Lonzo Ball, Kyle Kuzma and Brandon Ingram have all spent large parts of the season injured. With only seven players under team control past 2019, Johnson’s replacement must come in and make a number of pivotal decisions regarding the roster.

Most experts around the league will also admit that the Lakers’ season unraveled in the midst of the Anthony Davis trade saga. Ironically enough, both former Pelicans’ GM Dell Demps and Johnson were either fired or resigned following the failed agreement between the two teams.

However, Magic’s role in attracting James into a Laker uniform surely cannot be overlooked. The franchise endured little success with Johnson at the helm of their front office, but at the least he helped acquire James. The 15-time all-star remains a beacon of hope for Laker fans despite a disappointing first season in purple and yellow.

What’s Next for the Lakers

According to some reports, Johnson and head coach Luke Walton hadn’t spoken in weeks prior to Johnson’s departure. Signs of a rift between the pair were always rumored throughout the season.

Johnson did provide insight into his relationship with Walton at his press conference.

Bleacher Report reported that Johnson was given the power to fire Walton prior to his resignation.

Evidently, Johnson was weighing that decision heavily before deciding on his own future.

Pelinka and whoever the Lakers’ new president will be must work together to make a decision regarding the head coach.

Johnson’s abrupt resignation essentially signals the end of a two-year project that failed. Although, there are plenty of pieces leftover for someone to pick up and transform into a title contender.

The next two decisions Jeanie Buss makes regarding both of these positions will unquestionably warrant plenty of media attention.

Johnson still feels that this Laker team isn’t far from competing for an NBA Championship.

For Johnson, his last two years as a Laker didn’t go as planned, yet he’ll now return to doing what he does best.