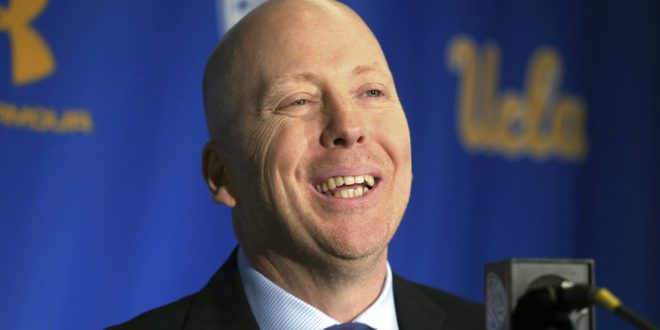 Mick Cronin is introduced as the UCLA's new head basketball coach at a news conference on the campus in Los Angeles Wednesday, April 10, 2019. Cronin was hired as UCLA's basketball coach Tuesday, ending a bumpy, months-long search to find a replacement for the fired Steve Alford. The university said Cronin agreed to a $24 million, six-year deal. (AP Photo/Reed Saxon)

The Bruins announced the hiring of Cronin on Wednesday after a lengthy search to fill its head coaching vacancy.

Cronin is getting paid a fair amount of money to move to Los Angeles. UCLA is paying him $24 million for six years, making him the seventh highest paid college basketball coach.

The Bruins had been searching for a replacement for former coach Steve Alford since he was fired mid season. UCLA athletic director Dan Guerrero appeared to get his man in TCU coach Jamie Dixon, but the deal fell through and the Bruins were left empty handed.

However, Cronin signed a week later.

Guerrero knew Cronin was the man for the job.

Success at prior jobs

Cronin has spent the majority of his coaching career with Cincinnati. In 13 seasons with the Bearcats, Cronin won 296 games and took his team to the NCAA tournament nine straight times.

He led the Bearcats to back-to-back AAC tournament championship sin 2018 and 2019. He also delivered regular season championships in 2014 and 2018.

Prior to Cincinnati, Cronin coached at Murray State for four seasons after serving as an assistant at both Louisville and Cincinnati.

Despite leaving for UCLA, the decision to leave the Bearcats wasn’t easy for him.

Cronin up for the challenge

Cronin will inherit a UCLA program that struggled a year ago. The Bruins finished seventh in the PAC-12 and ended up going 17-16 in the regular season.  UCLA limped to the finish under interim head coach Murray Bartow after former head coach Alford was fired just 13 games into the regular season.

UCLA missed the NCAA tournament this season for the first time since 2016 and hasn’t won a PAC-12 title since 2014.

Despite the challenge, Cronin is optimistic about his new team.

Cronin will have plenty of talent to work with. UCLA boasted the sixth best recruiting class in 2018 and many of the players from the class will be returning.

UCLA hasn’t won a national title since 1995 and last appeared in the championship game in 2006, falling to the University of Florida. The Bruin faithful will hope that Cronin can return the program back to national prestige and bring home another title.

Previous Rodgers and Packers Move Forward
Next Preview: Gators Softball Back on the Road to Face Aggies