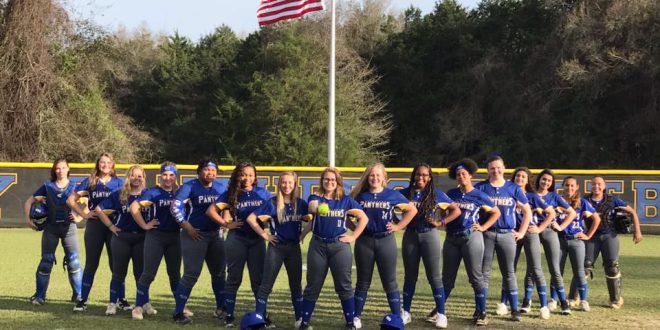 The Newberry softball team has a non-conference match up against the Dixie County Bears at  7 pm Tuesday at Dixie County.

Coach Schaffer’s Panthers are 5-14 overall. Last week they suffered losses to both Keystone Heights and Palatka, both conference match ups. Newberry is currently sitting at fifth in the 5A District 5 standings as the regular season is quickly coming to a close.

For coach Wimberley’s Bears not only will they will be seeking to improve their 7-11 record, but they’ll also be honoring their seniors on Senior Night.

When it comes to the numbers Newberry and Dixie County are quite similar. The Panther’s overall batting average is .286, while Dixie County’s is .277. Be on the lookout for one of Newberry’s leading hitters, sophomore Jakyria Stanley. She’s ranked first in the District 5A standings when it comes to on base percentage, slugging percentage, and home runs. Her on base percentage is .707, way ahead of the national average of .396. For the Bears, they’re led by freshman Juliann Smith. She has a batting average of .362 and currently has 17 hits this season.

Although Tuesday night will be the first time the teams have met this season, they’ve faced many common opponents throughout the year. Newberry lost a close one to Bronson early on in the season 12-11. Dixie County, however, pulled out a 14-4 win over Bronson just last week. Both teams have also faced Chiefland this season. The Panthers lost their match up 17-2 and will be facing Chiefland again next week. The Bears have split two games against Chiefland.  The two teams also have P.K. Yonge on their schedules.