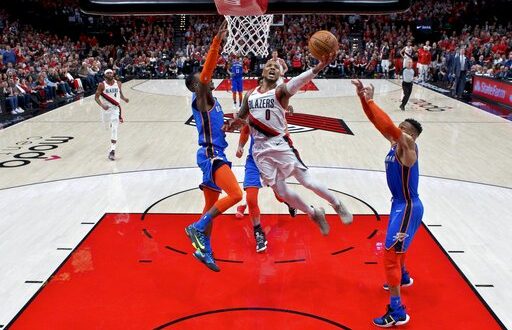 The first round of NBA playoffs continued last night as four Western Conference teams were in action.

The Portland Trailblazers blew out the Oklahoma City Thunder by 20 points, 114-94, and the Denver Nuggets came back from 19 points down to beat the San Antonio Spurs 114 to 105.

Damian Lillard and Jamal Murray led the way for their respective teams to victory. Portland now takes a commanding two-game lead as they head to OKC and Denver tied up the series before they on the Spurs on their home court.

The guard tandem of Lillard and C.J. McCollum has been a handful for OKC. Last night the two combined for 62 points and outscored the Thunder’s starting guards by 41 points.

Lillard has also been effective on the defensive end guarding triple-double machine Russell Westbrook. Westbrook struggled from the field and was only able to put up 14 points on 5 of 20 shooting from the field. McCollum led all scorers for the game with 33 points and made an impact on the glass grabbing eight rebounds.

The game was close in the first half of the game. It was a back and forth matchup and ended up being tied at halftime at 54.

Portland took control of the game in the third quarter when their offense erupted for 37 points and outscored OKC by 16. Lillard and McCollum stepped up for their team on a night when only one other player on the team hit double digits in scoring which was Maurice Harkless who chipped in 14 points.

The San Antonio Spurs took game one of the series as the seventh seed going up against the No.2 seed Nuggets. Many players on Denver had their first playoff experience in game one. Denver’s top four scorers have never played in the playoffs until this season. Even though they are the higher seeded team, they still had to go up against one of the best coaches in NBA history Greg Popovich.

After dropping game one, things looked similar in Game 2 as Denver was trailing by 10 points at the half. Denver was slowly chipping away at the lead in the second half.

Going into the fourth quarter Denver was only down by seven points and that’s when Murray took off. Murray sparked an incredible comeback scoring 21 of his 24 points in the final 12 minutes of the game.

The Nuggets had a better collective scoring output compared to game one. In game two, the Nuggets had four players score at least 20 points and five players overall with double-digit scoring. It was crucial for Denver to win game two before heading to San Antonio. The Spurs had one of the best home records in the regular season at 32-9.

Game 3 for the Nuggets and Spurs will be Thursday at 9 p.m. and the Trailblazers and Thunder tipoff at 9:30 p.m. this Friday.