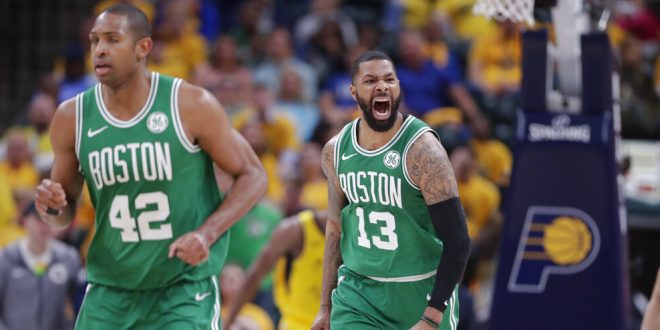 Boston Celtics forward Marcus Morris (13) celebrates during the second half of Game 4 against the Indiana Pacers in the NBA basketball first-round playoff series in Indianapolis, Sunday, April 21, 2019. The Celtics defeated the Pacers 110-106 to win the series 4-0. (AP Photo/Michael Conroy)

The No. 4 seed in the East completed a sweep Sunday of the fifth-seeded Indiana Pacers, taking Game 4 in Indianapolis 110-106.

The x-factor for Boston was the guy who’s been slowly improving as the season progressed, Gordon Hayward. Hayward balled out in his return to his home state, leading all Celtics’ scorers with 20 points on 7-of-9 shooting from the field.

“It’s been a long process to get back to where he probably feels as good like he does now and we knew that going in,” Stevens said of his star. “We just said all year, 20, 40, 60, 80, every game, every 20 games he’s gonna get a little bit better, and he was big at the end of the game tonight for sure.”

Hayward led an impressive performance from a bench unit that needed to step up with Kyrie Irving (14 points) and Al Horford (14 points) combining to shooting 8-for-31 from the field (25.8%).

It was a welcome offensive outburst, as Boston scored the most points out of any game in the series. Meanwhile, for Indiana the 106 points were the most they scored in a series in which they only broke the century mark once.

And that was a major storyline of this sweep. The Pacers survived Victor Oladipo’s season-ending injury well enough in the regular season.

But in the playoffs, it was always going to be a game-in, game-out adventure for as to who could consistently score outside of Bojan Bogdanovic (22 points in Game 4).

As a team, Indiana only scored 74 points in their Game 1 loss in Boston. While they increased their scoring every game, they never seemed to really click on offense, as Boston’s signature defense clamped down. It needed to, as the teams combined to break 200 points only in Game 4.

“It was a scrappy series,” Hayward said. “Defensive series, physical series, credit to the Pacers on that end of the floor.”

Up next for Boston, they will most likely face top seed Milwaukee barring a historic turnaround by Detroit. The Celtics defeated Milwaukee last year in the first round seven games with no Irving or Hayward. The Bucks and likely MVP Giannis Antetokounmpo are a different machine this year though. The reality is that the series could go deep as well.

Lucky enough for Boston, the sweep has earned them some rest ahead of that.