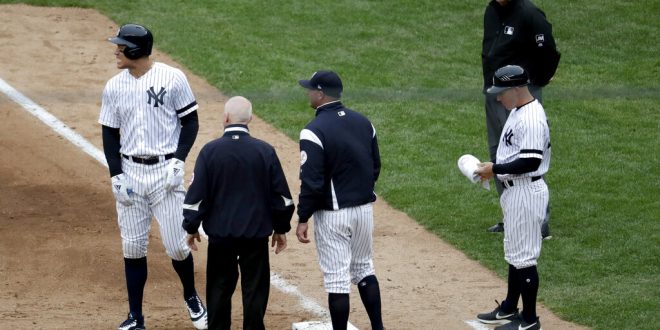 New York Yankees' Aaron Judge, left, reacts while talking to a trainer and bench coach Josh Bard, center, after hitting a single to right field during the sixth inning of a baseball game against the Kansas City Royals, Saturday, April 20, 2019, in New York. Judge left the game with an apparent injury. (AP Photo/Julio Cortez)

The injuries are continuing to mount for the New York Yankees. Just over three weeks into the season, New York has 13 players on the injured list (IL). This graphic, depicting some of their star players, is going viral across social media:

Check out some of New York’s most notable players on the IL below:

Right-fielder Aaron Judge exited Saturday’s game against the Royals after injuring himself on a swing. Tests revealed Judge has a strained left oblique. He is out indefinitely, with manager Aaron Boone calling his injury “pretty significant”.

Judge himself spoke about the difficulty that comes with landing on the injured list early in the season:

Injuries on Both Sides of the Ball

While a large portion of New York’s injuries come from big bats in their lineup, don’t be deceived. Their pitching has been stung as well. Luis Severino, an ace starter for the team, was on the IL before the season even started. Both Severino and key bullpen arm Dellin Betances started the season with shoulder injuries.

Despite the number of injuries plaguing New York, the Yankees sit in second in the AL East, 2.5 games back from the Tampa Bay Rays. With a record of 11-10, they seem to still be finding ways to win.

After taking three of four from the Kansas City Royals, the Yankees are on the road to face the Los Angeles Angels.

Born and raised at the ballpark! Typically quiet- until it comes to sports. I'm a South Florida native with a passion for baseball nearly as strong as my faith. Grew up in garnet + gold, turned out sporting orange + blue. Likely to be found with a camera. And yes, I take food pictures.
@victoriarossman
Previous Beantown Brooms: Celtics Complete First Round Sweep of Pacers
Next Jazz Keeps Postseason Hopes Alive with Win Against Rockets