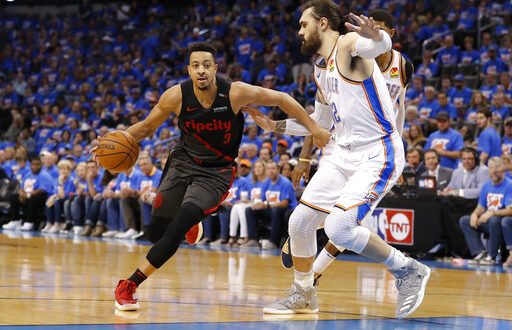 Blazers win on the road to take 3-1 series lead

C.J. McCollum led the way with 27 points for the Portland Trail Blazers as they defeated the Oklahoma City Thunder 111-98 to take a 3-1 series advantage.

The dynamic duo of McCollum and Damian Lillard has carried Portland all season long and their play has carried over to the postseason. Lillard scored 24 of his own to go along with eight assists in the win.

The two have been the key factor for the Blazers hot start in the postseason. Portland came into the playoffs with a chip on their shoulder after being swept in the first round last year.

Portland was down seven with just over two minutes to go in the first half. The Blazers would end the half on an 11-3 run and wouldn’t look back from there.

The duo for the Thunder, Russell Westbrook and Paul George, wasn’t as effective yesterday. George did have a double-double with 32 points and 10 rebounds but was limited in the first half due to early foul trouble. Westbrook had a rough night shooting, again, scoring just 14 points going 5-21 from the field.

For the Blazers, they got some much-needed help from their surrounding cast. Al-Farouq Aminu was effective scoring 19 and hitting four three-pointers; he had a +/- of 20 in the win. Enes Kanter has stepped up huge for Portland since Jusuf Nurkic went down with a tragic injury. Kanter has been a monster on the boards averaging 9.5 rebounds per game so far in the series.

This Blazers team looks more determined than in recent years after early exits in the postseason. With a 3-1 lead, they look to close out the series at home.

With the Blazers hosting the Thunder for game 5, they are in a strong position to win the series. Tipoff is set for 10:30 p.m. tomorrow night as Oklahoma City will have their hands full trying to get back into contention.

Previous Magic fall behind 3-1 in series to Kawhi Leonard and the Raptors
Next Beantown Brooms: Celtics Complete First Round Sweep of Pacers