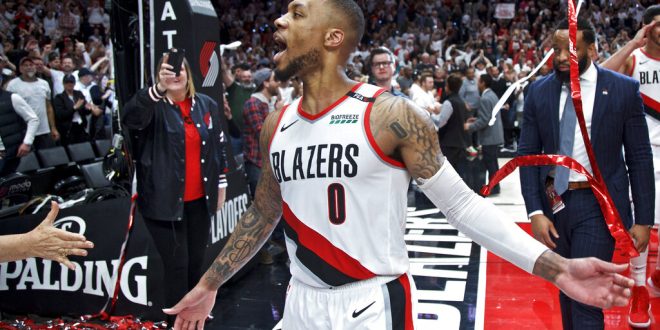 Each of these phrases can apply to Damian Lillard‘s 50-point performance against the Oklahoma City Thunder on Tuesday night.

No. 3 Portland eliminated the No. 6-seeded Thunder with a 118-115 victory on their home court in Game 5 of Round 1 of the Western Conference Playoffs. The four-time All-Star capped a dominant performance, and series, for his team with a 37-footer at the buzzer. Paul George contested Lillard’s as tightly as he could, but to no avail.

Pandemonium would proceed to occur in “Rip City.”

Lillard becomes the first player in NBA-playoff history to score 50 points and hit 10 3-pointers (10-18 FG) in the same game. The 10 made field goals from behind the arc also marks a franchise record.

As for the Thunder, Russell Westbrook and co., they’ve now crashed out of the playoffs in the first round in three consecutive seasons. Billy Donovan’s team has gone 4-12 in playoff games since the departure of Kevin Durant to Golden State.

Portland will face either the No. 7 San Antonio Spurs or the No. 2 Denver Nuggets in the next round. The Nuggets lead that series 3-2 as it heads to San Antonio for Game 6 on Thursday.

This series was also ever so close from heading to a Game 6.

It didn’t take long for the guard to find his stroke in his latest performance. Lillard had 19 points in the 1st quarter on 6-of-9 shooting. After one half, he had scored 34 already. Despite this, Oklahoma City led by two entering the 4th quarter. With 7:30 left in the 4th, they even held a 15-point lead.

Once again, the Thunder shot themselves out of this game. Donovan’s team made just three of their last nine shots in the game. Westbrook himself missed his last 10 shots. Overall, he finished 11-31 from the field and 4-11 from 3-point range. However, in vintage manner, he finished with his 10th career triple-double (29 points, 11 rebounds and 14 assists).

For his career, Westbrook is still averaging 41.8 PPG in elimination games.

After the loss, Donovan couldn’t help but give credit to Lillard’s shot-making ability.

While Portland won this series with relative ease, they originally weren’t even the favorites to advance. Oddsmakers had the Thunder advancing past the Trail Blazers despite entering the series as the lower seed.

The series victory marks a big leap forward for Terry Stott’s team. They had been swept each of the last two seasons in the first round by the New Orleans Pelicans and Golden State Warriors. It’s the first time they’ll be in the second round of the playoffs since the 2013-14 season.

The veteran head coach spoke briefly on Lillard after the game.

This series, Lillard, CJ McCollum, Enes Kanter and the rest of the group proved their worth. It will be interesting to watch what type of encore Lillard can produce in Round 2 against either San Antonio or Denver.

His opening act in this year’s playoffs truly was nothing short of spectacular.