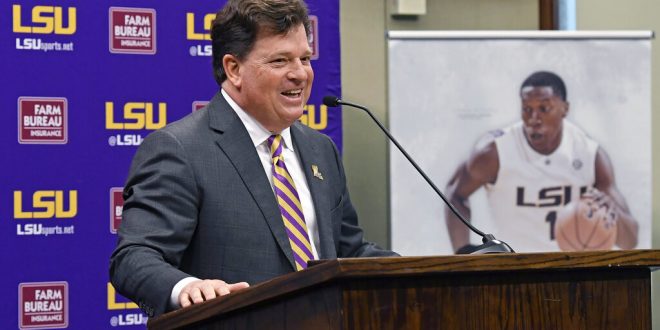 Scott Woodward answers questions after being introduced as the new Director of Athletics at LSU, Tuesday April 23, 2019, in Baton Rouge, La. Woodward, who graduated from LSU in 1985, was the Vice-Chancellor of External Affairs at his alma mater under former Chancellor Mark Emmert from 2000-2004. Woodward spent time at Washington and Texas A&M before accepting the job at LSU as a replacement for Joe Alleva. (Bill Feig/The Advocate via AP)

What fans can expect from Woodward:

Woodward previously served as the athletic director at Texas A&M for three years. Every Aggie sports program participated in postseason play during his time there. He also watched his teams win nine SEC titles.

He now comes back to Baton Rouge during a dominant time for LSU athletics.

Softball is currently ranked seventh in the USA Softball poll.  And right now, the baseball team is on a hot streak. The Tigers won the series over the struggling Florida Gators over the weekend. And this weekend, LSU travels to take on Alabama. The gymnastics team just ended as runner-up at the NCAA championship.

Woodward said he understands how important Tiger athletics is to the state of Louisiana.

He also comes to LSU at a time of uncertainty. Woodward is taking over for Joe Alleva. Alleva stepped down because of troubles with the basketball program. LSU says Alleva will be working a different position within the University.

The trouble began in early March. Basketball coach Will Wade was suspended because of possible recruiting violations for the entire postseason. Even with off-court trouble, LSU made it to the third round of March Madness. Wade was reinstated as the head coach just over a week ago.

Woodward spoke to the media Tuesday. Right now, Woodward is throwing his support behind Wade.

After his influential time at Texas A&M, the Tigers have taken over Twitter to express excitement over Woodward’s return.

Feels good to be back pic.twitter.com/Hq5U8rkPbx

Many fans are counting down the days until football season. The Tigers ended the 2018 season with just three losses – and hope the team does even better this year.

No matter what, Woodward’s goal is to make sure his players and coaches keep the spotlight.

Previous NBA Playoffs: Toronto Blows Out Orlando to Close Out Series
Next 76ers best Nets to advance to conference semifinals