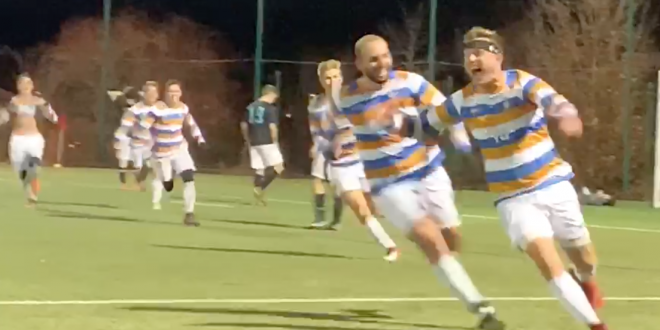 In 2017, the University of Florida Men’s Club Soccer team watched the national championship title slip out of their hands.

Placing third place in a championship run is never an easy pill to swallow. When the tournament is hosted nearly 2,000 miles away in Arizona, it’s a long trip home to contemplate what went wrong.

However, the Gators knew that wasn’t the end.

The boys came back the very next season with cold blood rushing through their veins as a true Gator would. With a chip on their shoulder and their name on the line, the UF Men’s Club Soccer team beat UNC after a 90-minute stalemate.

With a free kick served into the upper-90 by Tyler Garrison, the Gators became the 2018 NIRSA National Champions for the first time in club history.

Nate Johnson, the president of the Men’s Club Soccer team, says it was not an easy ride to the championship.

“My freshman year, we didn’t make the Regional Tournament.”

Nate, a fifth-year member of the team, explained how the men’s team did not qualify for the Regional Tournament for the first time in nearly five years before his freshman campaign.

This seemed to be a true turning point for the team.

Older players from past and present engrained the importance of qualifying for regionals in order to advance to bigger tournaments.

“All the older guys said how that was a disappointment because we had never not made the regional tournament in the past five years or so. We kind of gained some motivation. My sophomore year we made it to regionals and the national tournament which we were really excited about, but we lost in the group stage,” said Johnson.

“Last year, we went on a great run and made it to the final four of the national tournament, which we were very happy about, but we really thought that we could’ve won the whole thing.”

When the boys in Orange and Blue embarked on their national championship run in 2018, there were more struggles awaiting them.

Between missing starters, extreme competition and rain cancelations- they saw it all.

UF had to play BYU, the reigning national champs, in the quarterfinals, a highly-decorated team who earned semi-professional honors by competing in the Premier Developmental League. The Gators scraped by a win to knock out them out.

A statement from NIRSA HQ regarding the #NIRSASoccer National Championship. pic.twitter.com/4UNpJ3PdqP

Then, just when the Gators got into their groove, the entire national championship tournament that was held in November got postponed due to bad weather.

Yet, the extra time to prepare proved to be helpful as the team clinched their first ever national championship title since the club’s inaugural season in 1953. 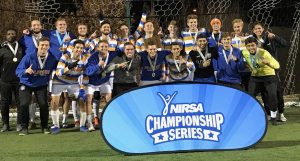 What It Means to Be a Club Athlete

UF Men’s Club Soccer liaison Brooke Cochran has worked closely with the team and knows how much time and effort the players put in.

Due to regulations regarding Title IX, there is no D1 men’s soccer team at UF. That’s where the men’s club team own the rights of essentially being synonymous.

However, it is a lot harder for clubs to function on campus since they are essentially independent. Cochran explains how deserving the men’s team is, not only because of their athleticism, but because of the dedication they put into fundraising, community service and volunteer hours.

“They run at a very high, organized, efficient level. Just as many soccer programs you see. They are dedicated to their sport, literally on and off the field. They are incredibly proud to wear their Florida Men’s Club Soccer [logo],” Cochran says.  “I think clubs are definitely a much deeper and bigger deal than some people may realize until they get on the other side of it.”

What is next for the Gators?

For now, the team will continue to build and replace graduating seniors and starters. Winning a national championship has created great awareness for the men’s club team and club sports in general at UF, says Garrison who was recently awarded Male Athlete of the Year.

Every semester, roughly 100 new players come out to the team’s spring skill evaluations. Last Fall, over 120 players showed up and only 8 found themselves on the roster.

Beyond campus recognition, the men’s team has earned respect from the local Gainesville community.

“We mean a lot to the community. A lot of coaches in the Gainesville area have reached out and told us we are role models for a lot of soccer players growing up. Players that maybe don’t want to sign to play college soccer and want to go to a school like UF and still play competitive soccer at a high level,” said Johnson. 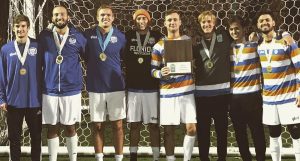 When it comes to next season, Johnson says UF has put their name on the map. To clubs across the nation, UF is now known as a serious competitor for the national title every year.

Chrissy Voltoline is a Junior studying Sports Media Journalism.
Previous Preview: Gators Softball in College Station for SEC Tourney
Next FEATURE: Esports; an Analysis on Competition Between the Digital World and the Physical

Fifth Time’s The Charm For the fifth time in program history, the Gators have trumped …