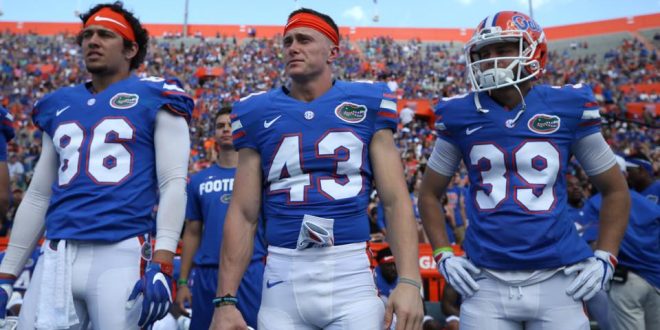 It was Thursday afternoon on March 14, 2018, when Nick Sutton’s dreams finally came true. The young, versatile athlete who has worked so hard to get where he is today, has now received a call that will forever change his life.

He was sitting in his apartment by himself when he got the call from John Clark, University of Florida football player personnel. It was the news he had been waiting to hear.  When Clark said “We would like you to be a part of the team,” Sutton immediately broke out into tears.

When Nick Sutton was a young kid, he was never forced by his mother to play any specific sport. Throughout his youth, he played baseball and basketball and enjoyed every minute of it.

When he got into high school, he decided to start playing football and wrestling.

“I immediately fell in love with the game of football when I made the Pine Ridge High School team.”

His high school years at Pine Ridge were unforgettable because of his new found love for the game of football and the many memories he made along the way.

During his last high school football game, he thought, “Wow this could be my last football game of my life.” That moment of fear did not stop Sutton’s determination to further his football career.

Just like brothers… They do the same. As we all start to head a separate way it's hard not to think of all the people and situations that got us to this point. Love these boys more than anything and blessed to have them in my life. And I would go back to those Friday's without thinkin twice. Wherever we go we will know it all started at the ridge. #missingcoachpoyner

When it came to college, Sutton knew he wanted to continue playing football. He thought about attending the University of West Florida because they were creating a football program in 2015 when he was graduating high school.

“I also thought about UCF because it was close to home, but ultimately, I just wanted to call myself a gator,” Sutton said.

With his mother’s encouragement and die-hard love for the Gators, he applied to the University of Florida. When he was accepted, it was a no-brainer that he would try out for the football team.

As soon as he got in Gainesville, he began the process to become a Gator athlete. He was disappointed to find out he would not be able to try out until he finished his first 60 credits in the Pace program.

Since football couldn’t be a possibility for two years, he wanted to find something else to keep him busy. Sutton met multiple cheerleaders that encouraged him to come to a clinic. Since then, he thought, “What better way to stay close to football and keep me prepared for football?” In May of 2016, Sutton joined the University of Florida cheer team.

Sutton’s former cheer teammate Brean Powell said she thought he joined cheer because it was a challenge. “He had never stunted before, but his drive and determination to succeed was powerful.”

After two years of cheering on the sidelines and making life-long memories with his coaches and teammates,  it was time to try out for the football team.

When Sutton got the call he had been waiting for, he was full of emotions. He called his mother and grandmother, two people that have been by his side since day one. He told them the great news.

Sutton’s mother said she couldn’t be more proud of her son.

“I couldn’t hardly work on March 14th. I knew how hard he trained but I just didn’t know how the tryout would go. It was one of the best days of my life.”

The transition from the sidelines to the playing field was a huge one. Practice every day is a big one, but he expected that and was more than ready for it. The biggest change for Sutton was the people. He went from seeing his friends and coaches in the cheer program at least three times a week to none.

On the other hand, Sutton now has over 100 new teammates that have the same goal in mind; to perform to the best of their ability on the field and make gator nation proud.

Sutton made his collegiate debut in Florida’s season opener against Charleston Southern last year. Sutton strives to make more appearances on the field, as well as take advantage of every opportunity that goes along with wearing orange and blue. To find out more about the man wearing number 43, check out the Florida Gator roster.

“I know he worked so hard to be where he is today. He talked about making the team for so long and he finally did it. It’s what he’s wanted to do his whole life,” Powell said. 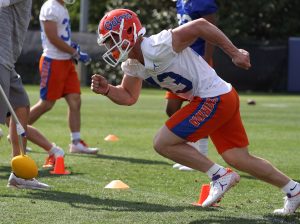 To listen to a sit-down interview with Nick Sutton about how he got to where he is today, click the link below to listen to the audio file.

Not everyone has a success story but Nick Sutton’s is just beginning.