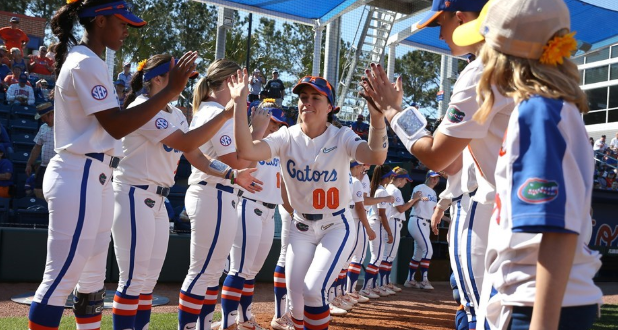 It was a scene reminiscent of 2018’s Super Regional. Jordan Matthews at the plate with the game in her hands. And she delivered, again.

The ninth-ranked Gators (41-15) defeated the South Carolina Gamecocks (36-17) 6-5 in the opening round of the SEC Tournament. They advanced thanks to a seventh-inning rally when down 5-2.

Fans had to wait for a result though as a lightning strike followed by severe weather would delay the game for about five hours after the first inning.

Elizabeth Hightower started the game sharp but came out after the delay a different pitcher. She’d allow four runs as Florida pitching had to piece the game together without Kelly Barnhill

Don’t Call It a Comeback

Florida was held in check offensively for most of the game. The Gators didn’t put up their first run until the sixth.

Tim Walton’s team was 1-9 with runners in scoring position at one point in the game.

Lindaman drew a leadoff walk and a groundout by Jaimie Hoover moved her over. Jordan Roberts would bring Lindaman around to score with a single in the right center gap.

Hannah Adams then doubled in that same gap but pinch runner Amanda Beane was held up at third. Sophia Reynoso drove in Beane after a lengthy at-bat that ended in her reaching on an error.

Then came Matthews. She drove a 3-2 pitch to left that was inches from clearing the fence. Adams scored and Reynoso came all the way around from first. The rally was complete.

A big rally in the late innings capped off by a Jordan Matthews walk-off, and we're moving on to Round 2❗#GoGators pic.twitter.com/wqgmLesIry

“I wasn’t looking for anything, just to make good contact,” Matthews said. “I know honestly, I was thinking just one more run. Just to hit a deep enough sac (fly). I wasn’t trying to do too much.”

She’d finish 2-for-4 with two RBIs, a double and a triple.

She said her team’s play today shows a big step in the right direction at this time of the year.

“I think it is just us really picking it up, now that it is the postseason we need to take a step forward to start playing better softball in every game we play,” she said. “I think we are going in with the intent that we are going to play better than we have all year and make things happen.”

Next up for Florida is a rematch against the 10th-ranked LSU Tigers. These two teams last met in Baton Rouge all the way back in March.

Florida was on the losing end of what was then its second conference series of the season.

The Tigers enter losers of six out of their last 10 including being swept at home by Alabama.

They lead the SEC with a .317 team batting average. Freshman Savannah Stewart enters hitting .409 in the last three weeks of the regular season.

The Tigers and Gators will square off on the SEC Network at 4 p.m.

Previous FEATURE: Esports; an Analysis on Competition Between the Digital World and the Physical
Next FEATURE: Gator Football Player Nick Sutton Goes from the Sidelines to the Playing Field