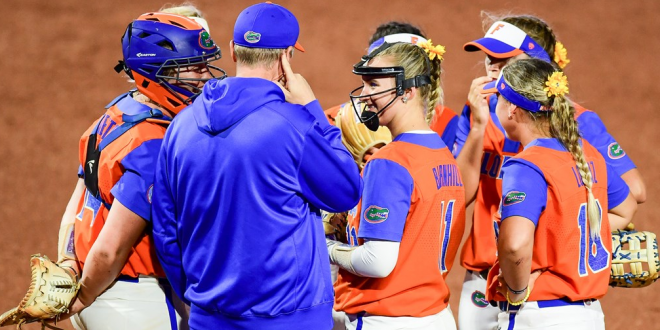 Florida softball begins the Gainesville regional this afternoon at 2:30 p.m.

The Gators enter as the NCAA Tournament’s fifth overall seed. They’ll face the Boston University Terriers in the second game of the regional. The winner of that will face the winner of game 1 earlier on Friday.

Game 1 begins the festivities with a game between the Stanford Cardinal and Boise State Broncos.

Kelly Barnhill on the perks of hosting:

Who Are the Terriers?

They are coached by Ashley Waters who said she is looking forward to playing in some warm weather. That’s fitting seeing as her team is heating up. Like Florida, BU didn’t drop a single game in their conference tournament.

Waters on getting to this stage:

Boston has a dynamic pitching duo in Ali DuBois and Emily Gant. DuBois and Gant first and second in earned run average, respectively.

Besides her 1.32 ERA, the 2018 and 2019 Patriot League Pitcher of the Year leads her conference in the following categories:

She also posted a .995 fielding percentage behind the plate for Boston.

The Last Regional Ever For Two Gator Greats

For Kelly Barnhill, Amanda Lorenz and the three other seniors this will be their last regionals. It’s a perfect 4-for-4 for this senior class.

Lorenz said the team is just excited to be back playing at home. She’s looking forward to seeing if the offense from College Station transfers over to Gainesville.

If she had it her way, the regional would’ve started the day after the SEC championship.

Barnhill on the seniors’ journey to this moment:

“I’ve just tried to leave the last one as Senior Day,” Lorenz said. “This is another game. I’ve been focusingon making every memory count. And postseason is the best time.”