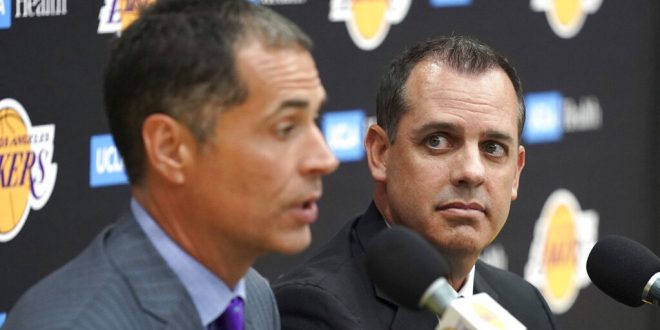 The drama unfolding in the Los Angeles Lakers front office seems more fitting of a Hollywood movie than a basketball team.

Former Lakers president of basketball operations Earvin “Magic” Johnson appeared on ESPN’s “First Take” Monday morning. He held little back as he explained why he suddenly resigned on April 9 just over an hour before the team played its final game of the season.

I had a great time this morning on @FirstTake with my brother @stephenasmith, @maxkellerman , and @MollyQerim. I am glad I was able to share my truth. pic.twitter.com/ZP6QdnRJbc

“I got things happening and being said behind my back, and I don’t have the power I thought I had to make the decisions,” said Johnson.

According to Johnson, Lakers general manager Rob Pelinka commented to people inside and outside of the Lakers organization about Magic’s spotty attendance in the office and that he was “not working hard enough.”

For Johnson, though, “the straw that broke the camel’s back” was his inability to fire Luke Walton as head coach.

.@MagicJohnson tells @FirstTake exactly why he stepped down as president of the Lakers.pic.twitter.com/FwT6kCNG3y

Johnson said he explained to the owner and president Jeanie Buss why he wanted to fire Walton. However, a series of indecisive meetings and the inclusion of Lakers president of business operations Tim Harris into the decision blocked him.

“I only really answer to Jeanie Buss and now Tim is involved,” Johnson said. “It’s time for me to go.”

The plot later thickened Monday afternoon when Pelinka introduced Frank Vogel as the new Lakers head coach. He could not escape questions about Johnson’s “First Take” comments, though.

Pelinka said it was “saddening and disheartening” to hear Magic’s comments and referred to some of what he said as, “he said, she said things that aren’t true.”

To add to the saga, the Lakers hired Jason Kidd as an assistant coach. The Hall of Fame point guard’s last coaching gig with the Milwaukee Bucks in 2018. It ended when they fired him midway through his fourth season.

It is unclear what precise role Kidd, who also interviewed for the head coach position, will have. However, he has a notably stronger relationship with Lakers superstar Lebron James than Vogel does. This has led to rumors that Kidd could be Vogel’s replacement if he does not work out, which Vogel was asked about at the press conference.

“I am very good at blocking out noise, Vogel said. “You can’t worry about looking over your shoulder.”

I'm a senior journalism student at Florida. I love sports, and I love covering sports. I'm one of the beat writers for the Gator soccer team right now, and if you follow me on Twitter @johnmiceli13 you'll never miss a soccer update
Previous Texas A&M Aggies defeat the Florida Gators in Game 1 of the SEC Tournament
Next SEC Baseball Tournament Day Two