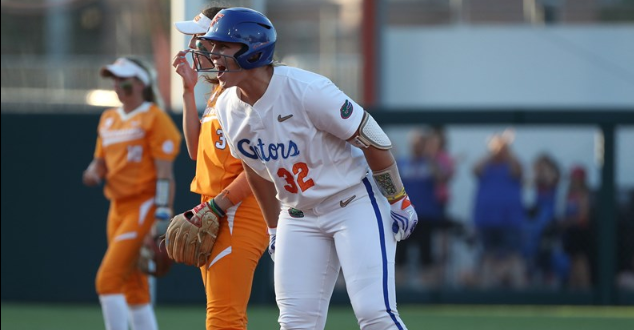 Gators Softball One Win from WCWS

Early runs led to an early lead in the 2019 Gainesville Super Regional. The Florida Gators defeated the Tennessee Lady Volunteers 3-0 in game one of the NCAA Tournament’s second round matchup.

Tim Walton on the win:

A different Gator batter drove in each of Florida’s three runs Friday night. Kendyl Lindaman started the party in the first inning.

After a walk by Amanda Lorenz, Lindaman hit a double over the head of Tennessee center fielder Cailin Hannon to bring Florida’s first baseman home to score.

A Jaimie Hoover single moved over Lindaman and Sophia Reynoso had a seeing-eye single to score Lindaman in the next at-bat. Hoover later gave Florida more room to breath when she smoked a double in the gap to score Amanda Beane in the bottom of the fifth.

Lorenz said grabbing the lead in the first inning was definitely fun especially with knowing who was in the circle.

Barnhill on the effects of early leads:

Hoover had a home run against Boise State in the Gainesville Regional Final to put the game out of reach.  Her double on Friday night is her second straight game with an extra-base hit to extend a lead.

She finished Friday two-for-three with that RBI double.

“I feel really good at the plate right now,” she said. “The energy today was amazing in the whole facility and I just wanted to go up there and compete for my team.”

Barnhill and the Gator Defense

Tennessee shortstop Aubrey Leach was the only Lady Vols hitter to have multiple hits off Barnhill. Walton said no strikeout was bigger than the one Barnhill had against Leach in the fifth.

She now has only one run allowed with 45 punch outs to 14 walks and 13 hits over 42 innings. That leads to an ungodly earned run average of 0.16.

“Early on, her rise ball wasn’t breaking as much as it was in practice,” Walton said. “I thought she did a really good job of adjusting and making it work later.”

Additionally, she received some highlight reel plays from her defense to help maintain the lead too. Hannah Sipos had a heads-up play on a bunt to assist on a force out to a covering Reynoso.

Later on, she would help end an inning with a great effort on a diving catch.

Barnhill on her defense:

“Someone probably would say it best: ‘If you’re going to bat .171 you better make plays like that right?'” Walton said. “She showed why she plays as much as an everyday player for us.”

Super Regional wins don’t come easy. Walton isn’t stopping until his team clinches its berth to the Women’s College World Series. A win on Saturday would send Florida to its 10th.

He said he would spend his time figuring out how to score more runs and who was going to pitch on Saturday, not celebrating one victory in a best of three series.

“This is a big moment here, a big stage, and we need some players to step up,” she said. “Big players step up in big games, so we’ll be looking for some players to do that (Saturday) in a big game.”

Walton on the key to Saturday:

Florida and Tennessee square off Saturday at 6 p.m. Fans can catch the game on ESPN.