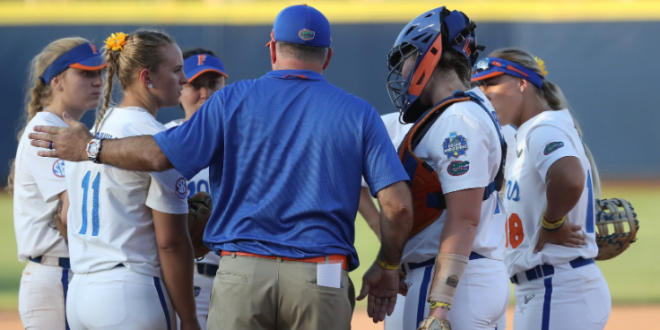 One pitch was the difference in Florida’s first game of the 2019 Women’s College World Series. Now, Gators softball’s back is against the wall.

The fifth-seed Florida Gators were downed by the 13th-seed Oklahoma State Cowgirls 2-1 on Thursday night. They face Alabama in the loser’s bracket Saturday.

The loss puts Florida in a difficult situation if it wants to advance out of its side of the bracket.

Gators return to ASA Hall of Fame Stadium on Saturday at 1:30pm and will face the loser of @AlabamaSB & @OU_Softball #GoGators pic.twitter.com/jzq6p2DHAh

Four of the Gators’ six hits came from the leadoff spot. They finished 4-for-7 including leadoff singles in the sixth and seventh inning.

But, they couldn’t take advantage of the opportunities. Florida combined to go 1-for-13 with runners on base and 0-for-8 with runners in scoring position.

Florida’s two, three and four hitters even combined to go 0-for-9.

Jordan Roberts drove in the only run with a solo home run in the bottom of the second to tie the game at one run.

Florida had a prime opportunity to tie the game in the bottom of the seventh with two on and no outs after back-to-back singles by Sophia Reynoso and Roberts.

Jade Caraway and Jordan Matthews then both hit into a fielder’s choice to put pinch runner Amanda Beane 60 feet from tying the game. She’d stay there as Alex Voss grounded out to second base to end the game.

Why didn’t Caraway bunt in that two on and no out situation? Easy answer.

She made an attempt at a modified one that missed on the first swing.

“We had six hits, they had two, (but) they had bigger hits than us,” Amanda Lorenz said. “(If) we string those together, I think we’re sitting up here in a little different mood. We just need to find a way to pass the bat along and have (hits) happen at the same time.”

Kelly Barnhill was beat on two pitches all game. Those two pitches led to the only hits, and runs, of the game. The opposing pitcher beat her on them too.

Pitch one: middle on the outer third. Oklahoma State’s Samantha Show gave the Cowgirls the lead with a one-out solo shot in the top of the first with two strikes nonetheless.

Show sprinted around the bases with excitement after the round-tripper.

Pitch two: right down the chute over the middle. Show cranked this one to left center field to put her team back up in the top of the sixth.

“I missed two pitches to the best hitter on their team,” Barnhill said.

Barnhill finished her 29th complete game of the season with two earned runs on two hits with nine strikeouts to one walk and one hit-by-pitch.

Meanwhile, Show was 2-for-3 with the two homers plus allowing just one earned run on six hits in a complete game.

The other Cowgirl batters combined to go 0-for-20 with all nine of Barnhill’s strikeouts.

“Flush it and be more competitive,” Lorenz said.

Florida has the day off on Friday before another rematch with the eighth-seed Alabama Crimson Tide.

Walton said he’s been in this situation before. He’s even played for national titles after falling into this hole. He said it doesn’t require a new mindset.

“It’s about players being able to do what players do,” he said. “Players step up and are great in Oklahoma City. I think that’s the key.”