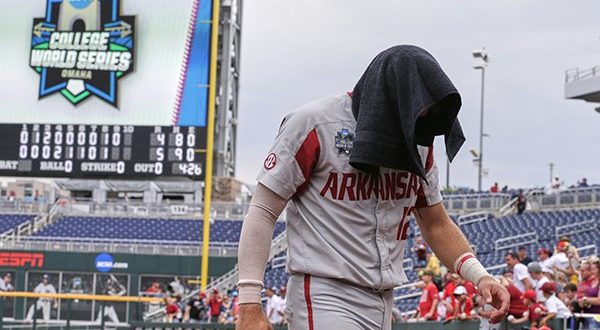 Day three of the College World Series has come and gone; and so has one of the eight original teams. Additionally, there is one less vacant spot in the semi-finals after Monday’s slate of games.

And Then There Was 7 – Texas Tech Eliminates Arkansas

After being the last team eliminated from Omaha last year, the Razorbacks were the first to pack their bags this year.

Heck of a run comes to an end in Omaha. pic.twitter.com/iby4RGegkU

Arkansas got the scoring underway as Heston Kjerstad sent a solo home-run over the fence to give the Razorbacks a spark. Sophomore Casey Martin ignited Arkansas’ offense in the third inning with an RBI triple. Martin later made it home after a base hit from Matt Goodheart.

After falling behind 3-0, the Red Raiders had seen enough of the “OmaHogs.” In the fourth inning, Texas Tech senior, Cameron Warren, sent a two-run shot flying to get the Red Raiders on the board.

Following Warren’s shot, Easton Murrell and Josh Jung would each tack on a solo home-run of their own to give Texas Tech the lead.

Tying the game up at 4-4 in the eighth inning, Arkansas looked to survive to lengthen their stay in Omaha.

However, the game wouldn’t stay knotted up long as sophomore Red Raider, Cody Masters sent a two-out RBI triple to the Arkansas outfield to take the 5-4 lead.

As the Razorbacks head back to Fayetteville, the Red Raiders continue their journey in Omaha and prepare to face-off against Mike Martin and the Seminoles on Wednesday at 7 p.m.

One of the biggest stories for the College World Series this year has been Mike Martin’s last bout in Omaha. Florida State’s head coach is in his fortieth year; and while being the all-time winningest coach in college baseball, he has no title to show for it. When the Seminoles tip-toed their way into Omaha, the college baseball world knew it had to be the baseball gods giving Martin a final chance.

Henry had a sleeve full of tricks and dabbled with fastballs, sliders and change-ups to keep the ‘Noles off balance. Over nine innings, the junior pitcher allowed just three hits and tallied 10 strikeouts all while not allowing a single Seminole to walk to first base.

Offensively, the Wolverines were quick to attack Florida State’s pitching staff as Jesse Franklin sent the second pitch off the game soaring over right field and out of the park. Franklin’s solo shot would be the only score until the fifth inning. Jimmy Kerr would smack an RBI single to score Jordan Nwogu and tack on an insurance run. However, who needs insurance when you’ve got Tommy Henry on the mound pitching circles around your opponent?

With a 2-0 win behind their ace, the Wolverines sit comfortably being the first team in Omaha to claim a semi-finals spot. Michigan will square off against either Texas Tech or Florida State this Friday at 2 p.m.

Two games deep into the World Series, Mike Martin’s Seminoles have only mustered to score one run on eight hits.

The baseball gods have just one more day to give Mike Martin and the Seminoles all the good omens necessary to put together a winning performance against Texas Tech. The Seminoles and the Red Raiders will go head-to-head with a semi-final spot on the line this Wednesday at 7 p.m. The winner of Wednesday’s contest will meet with Michigan on Friday.

Ainslie is a journalism major at the University of Florida where she specializes in Sports Media. Her main passion is college football as it was a huge part of her childhood. Ainslie serves as a current correspondent for the Ocala Star-Banner, a newspaper for the Ocala, Florida area. She currently covers Marion County high school sports.
Previous Gary Woodland wins US Open Championship, first career major
Next Tanaka propels Yankees to victory over Rays