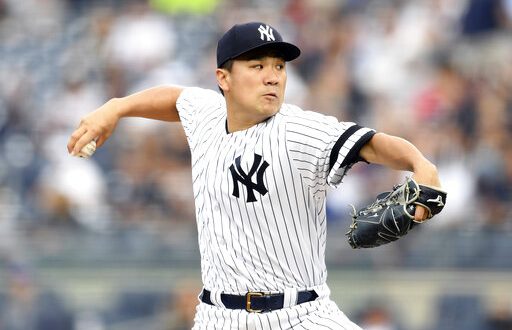 The New York Yankees defeated the Tampa Bay Rays 3-0 on Monday night in the first game of a three-game series in Yankee Stadium.

Japanese pitcher Masahiro Tanaka threw a gem. He allowed two hits and walked one while striking out 10 Rays over nine shutout innings. It was Tanaka’s fourth career MLB shutout and his first since July 2018. His slider was especially devastating on the night. It made up 40% of his pitches and generated 13 outs.

Masahiro Tanaka is the first @Yankees pitcher to toss a shutout with 2 H or fewer and 10+ Ks since Mike Mussina in 2002. pic.twitter.com/7hxTgVXQ3H

Overall, Tanaka has been inconsistent this season. He allowed 12 earned runs over his last four starts to the tune of a 5.79 ERA. Monday night showed how dominant he can be, though. The Rays never had a runner in scoring position. Yankees manager Aaron Boone spoke about Tanaka’s performance after the game.

With Monday’s outing, the Japanese ace improved his season ERA to 3.23. He is scheduled to take the mound next Saturday against the Houston Astros.

All three of the Yankees’ runs Monday night came courtesy of homers. After Cameron Maybin reached base on a single in the bottom of the third, DJ LeMahieu went yard on the first pitch of his at-bat to put the Pinstripes on the board. It was LeMahieu’s eighth dinger of the season. The veteran infielder is having another strong hitting campaign, sporting a .311 average.

Maybin made it home again in the bottom of the fifth inning, this time under his own volition when he homered to left. He went 3-3 on the night. Both home runs were hit off of Rays starter Yonny Chirinos, who pitched six innings and gave up five hits.

Another notable home run hitter, Edwin Encarnacion made his Yankees debut Monday night after his trade from the Seattle Mariners. He went 0-4, although Boone was pleased with his at-bats.

Chirinos started the game strong, retiring the first seven batters he faced until Maybin’s single in the third. The Rays’ pitching has been a strong point this season. The team allows the least runs in the MLB and has the best team ERA.

The Rays have played the Yankees six times this season before Monday’s matchup and are 2-4 against them.

I'm a senior journalism student at Florida. I love sports, and I love covering sports. I'm one of the beat writers for the Gator soccer team right now, and if you follow me on Twitter @johnmiceli13 you'll never miss a soccer update
Previous CWS: Arkansas leaves Omaha, Wolverines pitch a gem
Next Are the Houston Rockets Blowing Up?