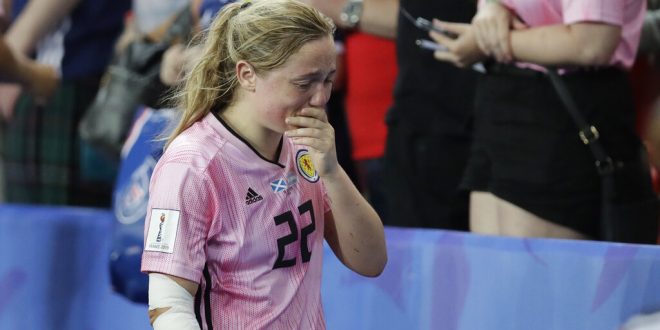 Scotland's Erin Cuthbert leaves the pitch at the end of the Women's World Cup Group D soccer match between Scotland and Argentina at Parc des Princes in Paris, France, Wednesday, June 19, 2019. The match ended in a 3-3 draw. (AP Photo/Alessandra Tarantino)

Group D teams decided their fate today in Matchday 3, which saw England face Japan and Argentina face Scotland. Heading into the matches, England led the way with six points, followed by Japan with four, Argentina with one and Scotland with zero.

Having already qualified for the next round, the Lionesses still wanted to ensure that they would top the group. All they needed was a draw against the Samurai Blue of Japan, but they earned all three points with a 2-0 victory.

Both coaches decided to rotate their squads a little bit heading into this one. One of England’s newcomers into the starting lineup was 20-year-old Georgia Stanway, who had a breakout performance.

England’s striker, Ellen White, had another impressive outing, scoring both goals of the match. The first came in the 14th minute.

Stanway did wonderfully to get away from her marker and played a touch-perfect ball into the path of White. She then had the composure to lift the ball over the oncoming Ayaka Yamashita to give her side the lead.

The Lionesses continued to push for the rest of the half, but were unable to make another breakthrough.

As the game wore on, with around 30 minutes remaining, England began to play wearily. They couldn’t hold on to the ball and continued to misplace passes. Unfortunately for Japan, they were unable to capitalize.

Mana Iwabuchi was Japan’s best player on the pitch, continuing to cause problems for England’s midfield and defense. She dropped into the midfield to pick up the ball, then drove at the Lionesses’ defense before either shooting or providing for a teammate.

Yuika Sugasawa also had a positive impact off of the bench, but she struggled to make the most of her chances.

After lost of pressure from the Japanese attack, England got a goal against the run of play. White got her second in what seemed like a half-chance. As she slid to the ground, she struck the ball with her left foot, curling it in at the near post.

With the win over Japan, England secured first place in the group with nine points. Thanks to the result between Argentina and Scotland, Japan secured second with four points.

Japan were unlucky not to get a result from the game. In terms of shots, Japan led 16 to 14. The Lionesses had more on target, though, with six compared to Japan’s five. England also edged the possession with 51 percent of the ball.

After leading Las Albicelestes 3-0 in the 73rd minute, the job looked all but finished for the Tartan Terriers. This result would see them overtake Argentina for that third position in the group. However, Argentina clawed their way back in the final 16 minutes to get another shocking result.

Scotland’s first-ever goal-scorer at a World Cup, Claire Emslie, returned to the starting lineup for Scotland. Meanwhile, Argentina opted for a change in formation, giving Sole Jaimes a partner up top in Estefania Banini.

For the first time in their history, Scotland took the lead in a World Cup match in the 19th minute. Kim Little scored after some terrific work from Erin Cuthbert. Cuthbert saw her first effort rejected by Vanina Correa, but the ball came back to her. She got her head up and picked out Little to give Scotland an early lead.

A Second Half Full of Goals and Emotion

Scotland wouldn’t take long to extend their lead after the halftime break. After Argentina originally cleared from a corner, Caroline Weir got the ball again on the right side and whipped it into Jenny Beattie, who made no mistake from six yards. Two-nil to Scotland in the 49th minute.

Scotland’s third came in the 69th minute from Cuthbert. Once again, Scotland scored from a right-sided corner kick. Cuthbert was in the right place at the right time to score an easy chance following Correa’s initial save.

Cuthbert sends home the rebound off the post and now Scotland are running away with it! pic.twitter.com/D3vaX5QD7y

The Wheels Fall Off

After Scotland’s third, it looked just about over in the Parc des Princes. After all, no team had ever come back from 3-0 down in a Women’s World Cup game; especially not with roughly 15 minutes remaining.

However, that’s exactly what Argentina did.

It all began in the 74th minute with Argentina’s substitutes Dalila Ippolito and Milagros Menendez combining to get one back.

Argentina take one back!!!

Milagros Menéndez comes in as a sub and scores Argentina's first goal of the tournament. pic.twitter.com/GtnF4FRGSK

Just five minutes later, Argentina got their second. Las Albicelestes had just over 10 minutes of regular time, plus stoppage time, to find a potential game-tying goal.

IT'S NOT OVER YET!

Argentina score their second goal in five minutes to pull within one of Scotland! pic.twitter.com/7RKbxpPQK7

Argentina then won a penalty kick. On the first attempt, Lee Alexander was able to save. However, VAR ruled that she had left her line early. On the retake, Florencia Bonsegundo converted, and Scotland’s colossal collapse had been completed.

The comeback queens of Argentina edged the possession at 51 percent. Both teams had 12 total shots, with Scotland landing seven on target compared to Argentina’s four. Scotland may have had the better chances, but are not worthy of a knockout-round spot after such a devastating collapse.