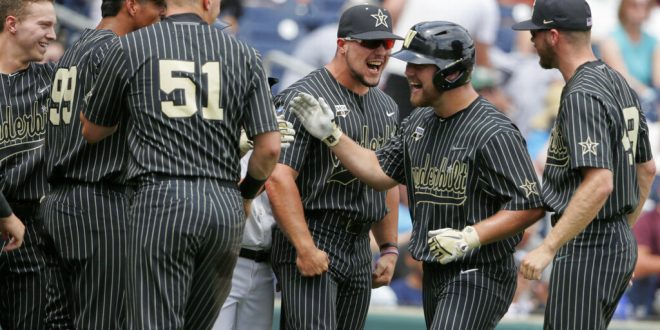 The college world series is in full swing in Omaha. The SEC went into the tournament with four teams and has already lost two with Arkansas and Auburn. The other two, Mississippi State and Vanderbilt are facing off now in a non-elimination game.

After their game was postponed yesterday due to weather, the Tigers and the Cardinals had an early wake-up call for the continuation of their game this morning at noon. Starting in the top of the fifth today, Auburn had a lot of work to do after leaving the game Tuesday 4-1.

The sixth inning went pretty much the same for both sides. Fitts got out of the inning with just seven pitches. Elliott used only seven pitches as well to get Louisville out of the inning but walked Edouard Julien. In the bottom of the seventh, Auburn began to come back. Ryan Bliss singled to center and Conor Davis doubled to bring him home making the score 4-2. However, Will Holland struck out swinging to end the inning.

The Cardinals added one of their own on in the top of the eighth. After Auburn walked one, Danny Oriente singled to center. Drew Campbell then singled to left and brought a run home, making the score 5-2.

In the bottom of the ninth, Auburn was down to their last three outs. Bliss started the bottom of the inning by grounding out to second. Davis then came up to bat and hit a one-run homer to give the Tigers hope. However, this home run would not be enough and the Tigers would be eliminated by the Cardinals 5-3.

After the first game of the day was postponed, the SEC matchup had to be pushed to the next day as well. The game between the Mississippi State and Vanderbilt is currently in the bottom of the fourth with Vanderbilt leading 1-0.

The top of the first went by without much excitement. Vanderbilt got two hits from Austin Martin and JJ Bleday. However, they would be left on base after a double play from Mississippi State. Jake Mangum would single for the Bulldogs to start their half of the inning but was also left on base.

Vanderbilt would start off the top of the second a little differently though. Stephen Scott hit a one-run home run to right to put the Commodores up 1-0. Moving to the top of the fourth, Vanderbilt is looking to string something together. They started the inning with a single from Philip Clarke and a double to right from Pat DeMarco. Mississippi State would get out of the inning though after a strikeout and two ground outs.

The bottom of the fourth started with a walk issued to Elijah MacNamee. He would be stranded on first though after a popout, a strikeout and a ground out.