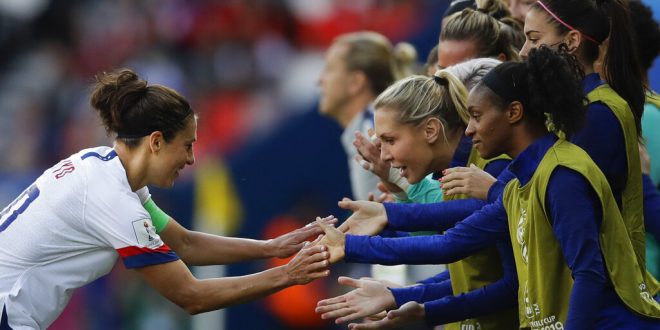 The USWNT has been on a roll as of late, combining for 16 goals in the past two games against Group F opponents Thailand and Chile. We’ve all seen how dominant they can be. But now, they’ll truly be tested for the first time this tournament when they take on European powerhouse Sweden. This will be the most anticipated and final match of the group stages.

The Swedes, or Blagult (Blue and Yellow), defeated the US in the quarterfinals of the 2016 Rio Olympics through a penalty shootout. This marked the USWNT’s earliest exit in any tournament history. Both the Swedes and the Americans are at the top of the charts with six points each in Group F. USA however, has the advantage due to goal differential after blowing out Thailand in a record-breaking 13-0 victory in their first match of the tournament.

This will be the sixth time and the fifth World Cup in a row where the Swedes and the Americans face each other. The last time these two teams met was back in 2017, where Rose Lavelle led the USA to a 1-0 victory.

Plus, the USA has played Sweden 38 times dating back to 1987. In the last thirteen matches, the USA is 5-3-5 which makes this game all the more exciting to watch. In

T0he Stars and Stripes are looking for some revenge on Thursday at 3 PM. The Americans need a win or a draw to top the group and head to the Round of 16 against the second place team from Group B on June 24 in Reims.

Head coach Jill Ellis rested most of her starters in the previous game against Chile. Attackers like Alex Morgan, Megan Rapinoe and Tobin Heath stayed on the bench which isn’t a huge deal when you have players like Carli Lloyd, Christen Press and Mallory Pugh at your expense.

Legendary striker Lloyd said this after their penalty shoot-out loss to Sweden in 2016:

Fast forward three years and Lloyd is just hours away from hopefully completing that mission.

The US still dominated Chile on all aspects of the game. They shot 14 times with nine of them on target while only allowing just one shot for Chile that missed wide of the net. Lloyd scored a monstrous goal within the first 11 minutes of the match.

Center defensive midfielder Julie Ertz scored her first World Cup goal off a header from a corner set-piece in spectacular Julie Ertz style. Then Lloyd settled for the third goal of the game coming from a corner as well. All three goals were scored in the first half.

However, Chile maintained its composure in the second half of the match when they did not concede another goal. You can thank goalie Christiane Endler for that. The Paris St. Germain club player had six phenomenal saves for Chile and acted as a brick wall for the US in the final stretch of the match.

Now, The USA is one goal away from tying and two goals away from setting a record for most goals scored by a single team in group play during the Women’s World Cup.

Sweden, as previously mentioned, also comes into the match with six points. However, they had a bit of trouble going against Chile in their debut match of the tournament. Chile held the Swedes scoreless until after the rain delay where Sweden scored two late goals.

Blagult also dominated Thailand in a 5-1 victory. A stat that the USWNT should be careful with is how communicative and complex Sweden’s team chemistry can be. In the last match, they had five different players score a goal. They dominate the midfield at all costs with head coach Peter Gerhardsson’s defensive-minded tactics. Plus, the team’s crisp passes make opponents uncomfortable. Creative players like Kosovare Asslani, Lina Hurtig and Stina Blackstenius are something to truly appreciate on the offensive end.

Asslani has scored twice in the tournament so far and has won Player of the Match against Chile.

Stellar goalkeeper Hedvig Lindahl still recalls what happened in the 2011 World Cup when Sweden beat the USA in the group stages. She’s only conceded one goal in the 2019 FIFA World Cup so far but she hasn’t truly been tested yet. Now, she faces the No. 1 ranked team in the world considered to have the best attacking-front on the planet.

Kick off is set for 3 PM at Stade Oceane in the city of Le Havre, France.

Recent grad from the University of Florida. Editing all articles on here while helping out the newbies. Love all things basketball.
@@MarcoJMartinez_
Previous 2019 College World Series Update
Next Chuck Jeroloman Hired As Assistant UF Baseball Coach 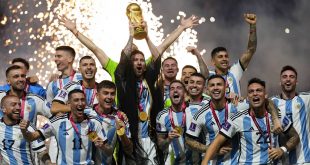 Throughout previous World Cups, Lionel Messi had been let down by Argentina. In the past, the …