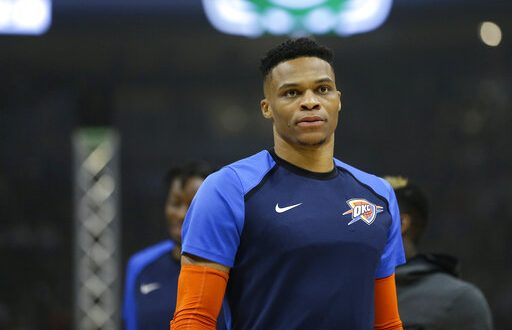 Oklahoma City Thunder point guard Russell Westbrook is the last star standing. However, this might not last. Following the Thunder’s decision to trade forward Paul George to the Los Angeles Clippers, it’s clear the team is now in a complete rebuild mode. Now, the team is exploring trades for the franchise’s leader in many statistical categories.

During his 11 year NBA career, Westbrook has always been the constant for the Thunder. Fellow stars such as Kevin Durant, James Harden and now Paul George have all left Oklahoma City. Westbrook had multiple opportunities to leave the Thunder and join a big market team. However, Westbrook has remained faithful to the organization that drafted him back in 2008. His loyalty is now paying off for Westbrook. Thunder general manager Sam Presti and Westbrook’s agent Thad Foucher have been working together to find a fair deal for both sides. With Monday’s trade of forward Jerami Grant to the Denver Nuggets, the Thunder acquires their sixth future first round pick and save $39 million in salary and luxury tax. The Thunder are preparing for a lengthy rebuild and the start of a new era of Thunder basketball, according to ESPN’s Adrian Wojnarowski.

With a rebuild coming to the Thunder, Westbrook wants to find a new opportunity where he can compete for a championship.

Now the question becomes: where will Westbrook go? The most talked about destination for Westbrook has been the Miami Heat. The Heat just finished off a blockbuster deal for All-Star Jimmy Butler. Miami still has pieces to get the deal done. The Heat can offer a solid replacement for Westbrook in the starting lineup in point guard Goran Dragic. Miami tried to trade Dragic to Dallas during the Jimmy Butler trade. However, it was reported Dallas asked for forwards Kelly Olynyk and Derrick Jones Jr. instead. This caused the Butler deal to be reworked. Miami doesn’t have many Draft picks to offer Oklahoma City. What Miami does have is strong young talent with NBA experience. Two potential centerpieces to this trade could be forward Justise Winslow and/or center Bam Adebayo. Another piece Miami can move is first-round pick Tyler Herro. Herro has been impressive in Summer League.

Story filed to ESPN: In aftermath of Paul George’s departure, OKC star Russell Westbrook is welcoming to idea of Sam Presti engineering a trade that would bring an end to his illustrious 11-year Thunder tenure. Miami's expressed interest, a destination that appeals to Westbrook.

It appears a trade to Miami is appealing to Westbrook. This report from Wojnarowski has launched Miami to the top potential landing spot for the former MVP. Kendrick Perkins, a former teammate to Westbrook, said on ESPN’s The Jump that he expects Westbrook to take his talents to South Beach.

With Paul George heading to the Clippers, @WojESPN reports the Thunder are talking to Russell Westbrook about trade scenarios. Ex-teammate @KendrickPerkins thinks Russ should go to the Heat, but does Miami want that contract? (Russ will earn $47.1 million the year he turns 34) pic.twitter.com/RokceRs7A6

Other teams being tossed around for Westbrook has been the Detroit Pistons, Minnesota Timberwolves and Houston Rockets.