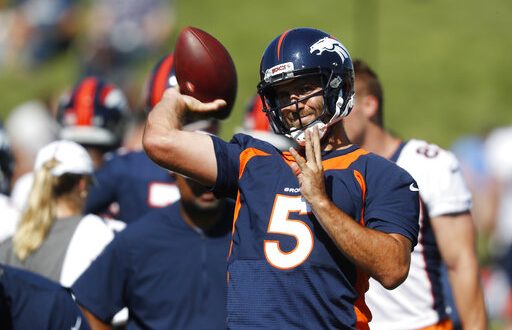 The Denver Broncos were at a peak when they won the Super Bowl in 2016 under Peyton Manning. However, the past couple season have been a collection of ups and downs. In 2017, they finished the season 5-11. They had a slight improvement under quarterback Case Keenum in 2018. The Broncos finished with a 6-10 record. This season, the Broncos are determined to turn things around. As the team opens training camp, the team needs to decide which of their two newly acquired quarterbacks will be named the starter. One is a Super Bowl champion and a veteran of the NFL for 12 seasons. The other is entering his rookie season.

With 11 seasons in the league under his belt, Joe Flacco believes he’s the change the team needs. He previously served as a quarterback for the Baltimore Ravens. He was traded to the Broncos before the NFL Draft. Some of Flacco’s other accomplishments under Baltimore include two AFC North titles. He led the Raves to a Super Bowl victory against the 49ers in 2012. His most notable play is a 70-yard touchdown pass in the 2012 AFC Divisional Playoffs against the Denver Broncos.

Flacco is excited to begin his journey with the new team as a starting quarterback. He refers to this opportunity as a second chance.

He doesn’t feel like he has shown his full potential on the field just yet. Flacco is ready to bring that energy into the season.

Compared to 34-year-old Flacco, Drew Lock, 22, is new to the world of the NFL. Following a strong career in college with Missouri, Lock was selected by the Broncos in the second round.  During his time as Missouri, he had a record-breaking 44 touchdowns in 2017. Yesterday, the team held their first training camp practice. Many Broncos fans were nervous about how the rookie would perform. After that first practice, many Broncos fans were ecstatic about the new addition.

Lock explains that he is constantly learning and growing in his football career.

The Broncos first game is September 9th against the Raiders.

Sara Dastgerdi is a current student at the University of Florida.
Previous Gus Malzahn Discusses Expectations at SEC Media Days
Next With the Trade Deadline Approaching, What Will The Rays Do?