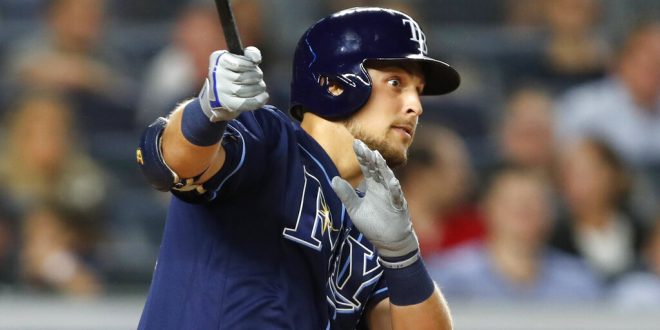 With the Trade Deadline Approaching, What Will The Rays Do?

We are just past the one hundred game mark in the 2019 MLB season. A shot at the American League East division title seems to be slipping away from the Tampa Bay Rays, but their playoff hopes are from over. Last year’s team wishes they were in the position that this year’s team is in. On July 31, 2018, the Rays were 53-53 and ten games out of the second wild-card spot. On July 21, they are 56-45 and 1.5 games back from the second wild card. It’s safe to say the club has improved tremendously.

It is true that the Rays have been in a better spot at different points in 2019. As late as June 14th, the club was in sole possession of the AL East. A 14-18 record since then has hurt the team and that’s a reality that the team and fans have to live with. However, with 61 games left now is not the time to throw in the towel. If last year’s team could go from a .500 team at the trade deadline to a 90 win season, then this team still has quite a season to look forward to.

Next, we ask the following question: what will the Rays do this time to improve? Last year it was calling up top prospects and making a couple of key trades. The former has been done this year. Two-way phenom, Brendan McKay has made four starts this year going 1-1 with a 3.72 ERA. The other notable prospect that has seen major league time is Nate Lowe. Lowe, who is the number four first base prospect per MLB.com, has batted .284 with five home runs and 15 RBIs in 81 major league at-bats.

Making an impactful trade is still a must for Tampa Bay. In fact, it is more crucial to make the right moves this year. The prospects that are ready to make an impact this year are already with the Rays. Any other help will have to come from the outside.

By 4 p.m. on July 31st, all trades in Major League Baseball have to be finalized. Starting this year, there is no waiver period in the month of August, so there’s more pressure to get the deal right in the next week and a half than ever before. The Rays will have to live with whatever moves they make (or don’t make).

While historically the Rays aren’t known to be aggressive at the Trade Deadline from a buyers standpoint, this year could be different. According to the Tampa Bay Times, Rays General Manager Erik Neander stated the Rays have the flexibility to make “more of a baseball decision than a pure budget constraint type of decision.” The Rays payroll currently stands at around $62.5 million (the major league average payroll sits at around $135 million). While the Rays can’t go out and take on Mike Trout’s $426 million contract, they have more money (and willingness) to spend more at the deadline this year.

The Rays will need to beat out fellow contenders like the Yankees to obtain needed upgrades. The Rays have the advantage of having a deep farm system to make a splash.

Sorry, but Wander Franco is not available.

Rebuilding teams looking for a haul will be looking to teams like the Rays to build for the future. The Rays have Rule 5 eligible prospects that probably won’t be able to fit on future rosters in the near future. The Rays might as well get some impact players for them.

The Men On the Rays Radar

The Rays intend to go out and get a right-handed bat and pitching. While pinpointing which bat the team is interested in pursuing has been tricky, the targeted arms have surfaced.

According to the Detroit News, the Rays are interested in Tigers starter Matt Boyd. Boyd has been one of the Tigers most reliable starters posting a 3.87 ERA in 18 starts. He isn’t eligible for free agency until 2023 and would be a member of the starting rotation for the next three and a half seasons. The Rays could also pursue Tigers reliever Shane Greene to boost a struggling bullpen.

Mets starter Zack Wheeler has also been on the Rays radar, a recent trip to the injured list could change that.

While there have been any rumored connections, the Rays may end up swiping Blue Jays starter, Marcus Stroman (maybe even Giants starter, Madison Bumgarner) out from under other contenders noses.

Besides Wheeler, all pitchers mentioned will likely be on a different team by the deadline and the Rays have the farm and payroll space to nab one of them.

Harrison is a sports coordinator at ESPN 98.1 FM/850 AM WRUF. He served as a beat writer for Florida Gators football for the 2019 and 2020 seasons. He also contributes to WRUF's Gainesville Sports Center segments and makes appearances on the Clash on Harp on Sports. Harrison has been a content writer for WRUF since January 2019 as well.
@HarrisonSmaj
Previous NFL Training Camp: Broncos Looking to Change QB from Old to New
Next Struggling Rays Host Division Rival Red Sox