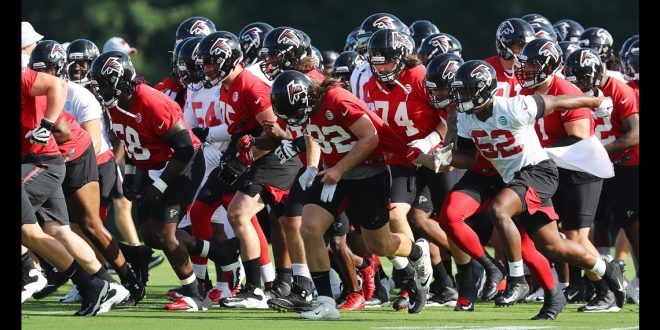 The Falcons are off and running, taking the field for the first practice of training camp Monday, July 22, 2019, in Flowery Branch.

For Dan Quinn’s Atlanta Falcons, the 2018 season was underwhelming. Despite a second-place finish in the NFC South, the Dirty Birds boasted a record of 7-9 and didn’t qualify for the playoffs. Heading into the season, the Falcons were called Super Bowl contenders. However, when they stumbled to a 1-4 start, that claim proved to be a stretch.

Fast forward to present day, the Falcons are looking to improve and it all starts with preseason camp. On Monday, they took the field for the start of training camp.

Last season, former Florida Gator Keanu Neal‘s third year in the league was cut short when he tore his ACL in Week 1 against Philadelphia. While Neal sat the rest of last season, he appeared strong and healthy during Monday’s non-contact practice.

While Neal is surely happy to be back on the field, Falcons defensive passing game coordinator Jerome Henderson is especially happy to have his safety back.

“Any time you get a player of that caliber back … it helps. You feel his grown man-ness on the field.” – Jerome Henderson

Jersey on. Helmet on. Gloves on.

Also taking the field for the first time in just under a year was another talented safety, Ricardo Allen. The former Purdue star tore his Achilles during last September’s overtime loss to the Saints. While seeing Allen back on the playing field is a great sight for Falcon fans, the safety wouldn’t say for certain how healthy he was.

Atlanta will have to fight through more injuries

Back in May, the Falcons took their first hit of the season as defensive end Steven Means went down with a season-ending Achilles injury during OTAs.

Atlanta’s IR list continues to expand after day one of camp when defensive lineman Michael Bennett went down on Monday with a lower leg injury. Bennett, who was battling for a spot in the starting rotation, would be helped off the turf by trainers. Not long after, NFL Network insider Ian Rapoport disclosed that Bennett would be out indefinitely while nursing a broken ankle.

#Falcons DL Michael Bennett, who went down in practice today, suffered a broken ankle and is out indefinitely, sources say. First day of work and already a major injury.

Shortly into day one of training camp, the Falcons announced that former Maryland head coach DJ Durkin would be a guest coach throughout the training camp. While Durkin will only be with the Falcons for 10 days, it’s the first official job he has taken since departing Maryland. Durkin was fired by the Terrapins after allegations of creating a toxic football culture at Maryland.

Despite many questions surrounding the hire, Dan Quinn was quick to defend the decision to hire Durkin.

Quinn and Durkin were both defensive assistants at Florida from 2011-12.

As the 2019 season nears closer and closer, the Atlanta Falcons will once again have to battle through injuries. However, they also gain some valuable talent that they didn’t have last year in Keanu Neal and Ricardo Allen.

On the offensive side of the ball, veteran quarterback Matt Ryan will continue his quest for a ring. In order to reach his goals, Julio Jones will need to be healthy and at full speed.

In a story very similar to last years’ it seems as though the Atlanta Falcons’ greatest opponent will be themselves and their ability to stay healthy.

Ainslie is a journalism major at the University of Florida where she specializes in Sports Media. Her main passion is college football as it was a huge part of her childhood. Ainslie serves as a current correspondent for the Ocala Star-Banner, a newspaper for the Ocala, Florida area. She currently covers Marion County high school sports.
Previous The Stats Behind the MLB Hall of Fame 2019 Class
Next Jaguars Face Questions as Camp Begins