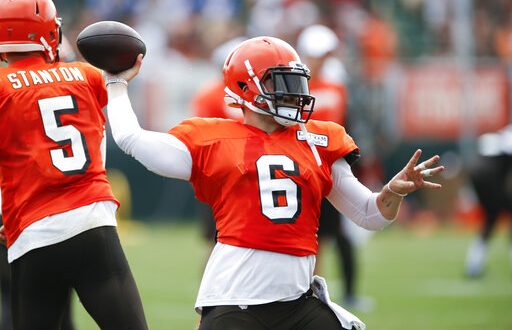 Hype Around the Cleveland Browns

In the last two years, the Cleveland Browns have gone from the perennial joke of the NFL to one of the most hyped-up professional teams in sports. With the addition of some big names in the offseason and quarterback Baker Mayfield entering his second season, expectations are high for the first time in a long time for Cleveland.

The Browns last made the playoffs in 2002 and have since been the laughing stock of the NFL. A low point came in 2017 when they went 0-16. However, a positive came out of that winless season. The first overall pick in the 2018 draft.

There is a history of inconsistent quarterback play in Cleveland. The Browns have had 29 starting quarterbacks since 1999 and could not help themselves in drafting Mayfield in 2018.

Mayfield brought with him an attitude and a competitive drive that lit a fire under the Browns organization. The Browns finished the season 7-8-1. Mayfield had a solid rookie season, finishing with 3,725 passing yards and 27 touchdowns.

The front office was active in the offseason in order to capitalize on their momentum, starting with the coaching staff.  Hue Jackson was fired in the middle of the 2018 season and the Browns were looking for a new coach. Enter Freddie Kitchens.

Kitchens started 2018 as the Browns running backs coach and was later named offensive coordinator after Jackson was fired.

Kitchens was viewed as a big reason why the Browns won five of their last eight games after he took over the offense. The 44-year-old was officially announced as the new head coach of the Cleveland Browns in January. Kitchens already has a strong relationship with Mayfield entering the 2019 season and spoke on how the second-year quarterback has improved so far in training camp.

The first-time coach will have more faces to get used to on both sides of the ball.

The Browns offseason started with the controversial signing of running back Kareem Hunt. Hunt was released by the Kansas City Chiefs in November after TMZ released a video of Hunt in a physical altercation with a woman in a hotel in February. Hunt will miss the first half of the season after being handed an eight-game suspension.

Still, Hunt’s ability in the backfield cannot go unnoticed. Hunt made the Pro Bowl in 2017 and was on his way to another 1,000-yard rushing season last year before he was suspended, posting 824 rushing yards in just 11 games.

In March, the Browns made a trade that put the NFL on notice when they added wide receiver Odell Beckham Jr. and defensive end Olivier Vernon to their roster. Cleveland had to send the New York Giants offensive lineman Kevin Zeitler, defensive back Jabrill Peppers and a 2019 first and third-round draft pick for the duo. However, the additions have created a buzz around the team not seen in a very long time.

Beckham has garnered attention for his emotion on the field and has been categorized as a diva by many. Nonetheless, he is one of the league’s most electrifying receivers. Beckham posted 1,052 receiving yards last season despite missing three games. Even though Beckham has drawn attention at times for the wrong reasons, his explosiveness will be a solid addition to a new-look offense. He spoke on his relationship with his new quarterback so far in training camp.

Vernon will also be a nice compliment to the Browns pass rush. Vernon has not been as productive as he once was, but with defensive end Myles Garrett coming off of a season where he posted 13.5 sacks, the Browns will be improved on both sides of the ball in 2019.

The Browns are projected to win 9 games in the 2019 season. With the big-name additions in the offseason, the hype around the Browns is well-founded and Cleveland may just make their first playoff appearance in 17 years.