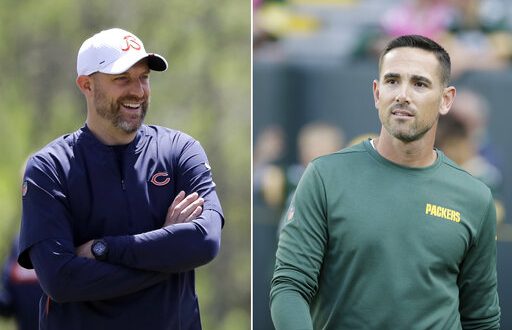 FILE - At left, in a May 22, 2019, file photo, Chicago Bears head coach Matt Nagy smiles during NFL football practice in Lake Forest, Ill. At right, in an Aug. 8, 2019, file photo, Green Bay Packers head coach Matt LaFleur walks onto the field before an NFL preseason football game against the Houston Texans, in Green Bay, Wis. The NFL's most ancient rivals open the league's 100th season with a flipped script: A year after the Bears went to Green Bay to open the season with a new look under coach Matt Nagy, the Packers are trying to do the same at Chicago under coach Matt LaFleur, a drastic change for quarterback Aaron Rodgers going against Khalil Mack and the Bears' defense. (AP Photo/File)

After a long offseason, NFL football is finally back.

The Bears come out of hibernation to host the Green Bay Packers for the first game of the National Football League 2019-2020 season. Two-time MVP quarterback Aaron Rodgers had this to say about opening the season against a division rival:

What to Expect From “Da Bears”

After winning the division with a 12-4 record last season, the Bears are again favorites to take the NFC North.

Not surprisingly, the play of Mitchell Trubisky will be incredibly important for the team. The quarterback had a solid year in 2018, throwing for over 3,200 yards (20th in the NFL) and finishing with the fourth-best QBR in the league despite missing two games due to a shoulder injury. He also ran for over 400 yards, the fifth most of all quarterbacks. At 24, many will be looking for Trubisky to really break out in year two of the Matt Nagy offense. Nagy said this about Trubisky’s ability as a runner:

Last season’s starting running back Jordan Howard left for the Philadelphia Eagles, but Chicago drafted his replacement in the third round of the 2019 draft when they selected Iowa State running back David Montgomery. Montgomery is expected to feature prominently in the offense, in tandem with shifty playmaker Tarik Cohen.

At receiver, Allen Robinson, Taylor Gabriel, and Anthony Miller are at the top of the depth chart. If all goes well, the 6’3- Robinson could post his first 1,000-yard season since he was with the Jaguars in 2015.

The Bears offensive line was one of the league’s better pass-blocking units according to Pro Football Focus and will look to build on that this year.

The monsters of Midway are here to stay.

Chicago had one of the best defenses in the league last season, and new defensive coordinator Chuck Pagano will hope to be dominant once again.

Khalil Mack headlines a strong linebacker corps that includes Roquan Smith, who led the team in tackles as a rookie, and veteran Danny Trevathan. Pro Bowler Akiem Hicks will be a menace on the defensive line.

Safety Eddie Jackson, who was also named to the Pro Bowl, will line up alongside new addition HaHa Clinton-Dix in the secondary. The Bears have good cornerbacks in Prince Amukamara and Kyle Fuller. Fuller intercepted seven balls last year, which was tied for most in the league. Both corners finished ranked in the PFF top 10 at their position last season.

What to Expect from the Packers

Last season marked the end of the Mike McCarthy tenure in Green Bay. McCarthy was fired when the team was 4-7-1 in December, and the Packers finished the season with a 6-9-1 record.

Matt LaFleur takes the coaching reigns and will try to excel with Aaron Rodgers. Before becoming Packers head coach, LaFleur was the quarterbacks coach for the Redskins during RGIII’s strong rookie year, the quarterbacks coach for the Falcons when Matt Ryan won MVP in 2016 and helped Jared Goff develop with the Rams. On January 8th, LaFleur decided to leave his role as Titans’ offensive coordinator for the head job in Green Bay.

Rodgers’ No. 1 target will again be Davante Adams, who reeled in over 1,300 yards last year. Fans will hope Marquez Valdes-Scantling and Geronimo Allison will have good seasons catching the ball from Rodgers, as well. Rodgers, who sat out the preseason, spoke about the preparation for week one:

The Packers will also be hoping for a breakout year from running back Aaron Jones. He was not a full-time starter last year, but he was remarkably efficient when he played. He will run behind a pretty strong offensive line that includes veterans David Bakhtiari and Bryan Bulaga.

Improving the defense was a big focus for the Packers in the offseason. They acquired linebackers Za’Darius Smith and Preston Smith, who will both start, and took two defensive players in the first round of the 2019 draft. They also signed safety Adrian Amos, who started for the Bears last season. Mike Pettine’s young defense does not have too many standout names, and only one player is over 30. They will be looking to prove themselves. Cornerback Jaire Alexander, who the team drafted two seasons ago, could have a breakout season at cornerback.

I'm a senior journalism student at Florida. I love sports, and I love covering sports. I'm one of the beat writers for the Gator soccer team right now, and if you follow me on Twitter @johnmiceli13 you'll never miss a soccer update
Previous Mullen Excited for Saturday in the Swamp
Next LSU Traveling to Texas For Top-10 Matchup