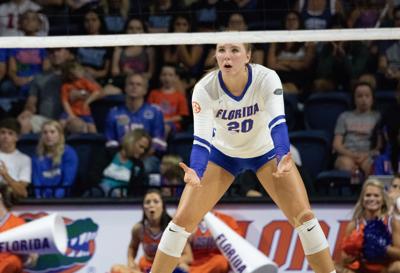 Florida Volleyball Falls to No. 1 Stanford in Home Opener

Florida volleyball faced a tall task hosting the defending national champion Stanford Cardinal in the Gator home opener on Wednesday night.  The match started out with a competitive first set but quickly turned into a Cardinal takeover in the second set.  The third set proved to be tighter for Florida, but ultimately Stanford took the match in three sets.

The Cardinal’s key to success was found in outside hitter Kathryn Plummer. The back-to-back AVCA National Player of the Year, recorded 21 kills, three kills and six digs.

The Gator offense came out blazing in the beginning of the first set. Carlton recorded four kills, while Paige Hammons recorded three.

However, Stanford responded with a strong offense led by Plummer. Plummer recorded nine of the Cardinal’s 15 kills in the first set.

The Stanford offense proved to be too much for Florida as the Cardinals edged out the Gators 25-22 in the first set.

Florida’s offense came to a near standstill in the second set, recording a total of five kills. Thayer Hall recorded three kills and one dig for the Gators.

Gator coach Mary Wise commented on the talent found on the Stanford team.

Florida (2-1) will travel to Minnesota to take on the eighth ranked Gophers on Saturday; Minnesota is currently 1-3 with loses to Florida State and Texas.