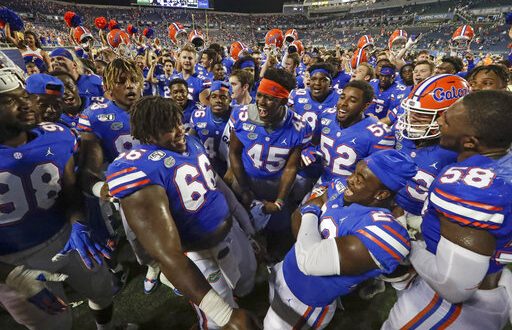 The Florida Gator defense has made a statement in the first two games of the season. After a hard-fought win over Miami and then a rout against UT-Martin, the Florida defense totaled 127 tackles. They sit at second in the nation in tackles for loss (26). Also, the passing defense is allowing an average of 177 yards a game. But with conference play opening up this weekend at Kentucky, the Gator defense still has a lot to prove. Florida safeties coach Ron English talked about the growing confidence in his young safeties.

A key player in the secondary that’s emerging as a leader for the safeties is junior Shawn Davis. Though it is his third year on the team, he didn’t play in many games his first two seasons. He was only in 18 of them. But in just the first two games of the 2019 season, he’s totaled eight tackles. English says that in prior seasons, Davis had very little confidence in himself and his playmaking abilities. That seems to have now changed, and English says he worked to get him ready for this.

English also talked about the youth in his safety squad. To English, it feels like Davis’ first season – even though he’s a junior. As for his other guys, a handful of them are underclassmen. And with older players like Jeawon Taylor, a senior, out last week with an injury, it has forced the younger players to step up.

And they have. In Florida’s 45-0 win against UT-Martin, true freshman defensive backs Chester Kimbrough and Jaydon Hill each contributed four tackles to the victory. English believes it was really important for some of the younger players to get plays in games early in the season.

English says his unit is growing in confidence. Davis is showcasing all his athletic abilities and seems prepped for a breakout performance this year. And now younger players like Kimbrough and Hill have some experience as they head into SEC play.

The Gators travel to take on Kentucky Saturday night. With starting Wildcat quarterback Terry Wilson out for the season, it will be interesting to see how the Gator safeties handle a new quarterback. Kick off is set for 7 p.m.