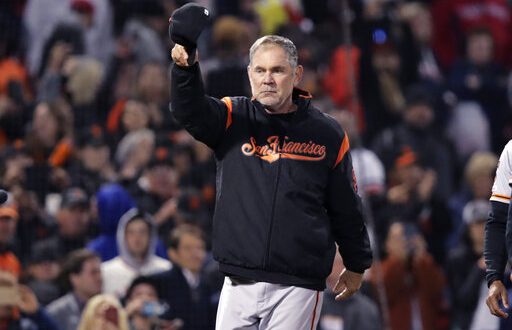 San Francisco Giants manager Bruce Bochy is celebrating becoming the 11th manager in the history of Major League Baseball to reach 2,000 wins. Bochy’s Giants took down the Boston Red Sox by a score of 11-3 on Wednesday night to reach the milestone. Bochy will be retiring at the end of the season.

The Giants started off the game with three runs in the top of the first and never looked back. Starting pitcher Jeff Samardzija went 6 innings, allowing one run and collecting two strikeouts and four walks. The Giants also scored 11 runs off of the bats of 6 different players (Crawford, Vogt, Adames, Pillar, Yastrzemski and Dubon).

The San Francisco Giants dominated for the majority of the night. But, the typically unfriendly confines of Fenway Park were not that last night for Bochy. Many managers would want the reception of such a big milestone to be at home, not on the road. The Red Sox did their best to show appreciation to Bochy for this once in a lifetime achievement. So, he addressed the media and described the disbelief of having a Boston crowd cheering for him.

Bochy even went out and tipped his cap to the Fenway Faithful. Something rare for road managers to do toward the Bostonians.

The Red Sox gave Bochy a souvenir for his 2,000th win on Thursday: a replica Fenway chair with the number 2,000 on it.

The Red Sox honored Bruce Bochy before today’s game. It looks like they’ve given him a special Fenway Park chair with the No. 2,000 on it. pic.twitter.com/RIjcBKuUhW

Bochy by the Numbers

He becomes the 11th manager to reach that total, the previous 10 have all been inducted to the Baseball Hall of Fame. pic.twitter.com/91ldbIYlOf

The Giants have 10 games left in their season. With the postseason an impossibility at this point, The Giants could win some big games in series versus both the Colorado Rockies and the NL-leading Los Angeles Dodgers. Bochy looks to end a 25-year career on a high note, and possibly as one of the top 10 winning-est managers in the MLB.