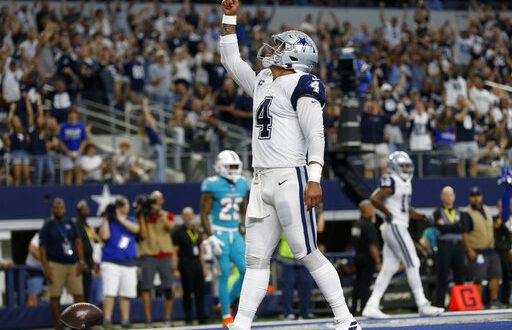 Dallas Cowboys quarterback Dak Prescott (4) celebrates his touchdown run against the Miami Dolphins in the second half of an NFL football game in Arlington, Texas, Sunday, Sept. 22, 2019. (AP Photo/Ron Jenkins)

The Dallas Cowboys dominated the historically bad Miami Dolphins on Sunday, winning 31-6. With the win, the Cowboys are now 3-0 on the season, and Miami is 0-3.

The Cowboys had themselves quite an offseason dealing with contract negations. Top talent including Ezekiel Elliott, Dak Prescott, and Amari Cooper all found themselves chasing news contracts with limited cap space. However, the Cowboys seem to have gotten things on the right track very quickly.

The Dallas Cowboys were potentially about to enter to 2019 season without star talent due to negation issues, but Cowboys owner Jerry Jones handled the team’s business before the season. Jones signed Elliott to a six-year, 90 million dollar contract extension. Prescott and Cooper seem to be next up, and they remain on the field with hopes of hefty contracts coming soon.

The Cowboys jumped out to a quick 2-0 start, outscoring their opponents 66-38 heading into their matchup with Miami. Dallas continued their rampage against the Dolphins behind strong play from the team stars.

Just 3 Weeks in, and the @dallascowboys already have a 2-game lead in the East ⭐️ pic.twitter.com/dMAEOy42xQ

As the season moves forward, Dak Prescott continues to prove his worth. The 2016 fourth-round selection racked up 2 touchdowns and 246 yards against the Dolphins. Prescott completed 19 of his 32 pass attempts and continues to lead the NFL in completion percentage with 74.5%.

In the 2019 season, Dak is currently ranked fifth in total yards with 920. In addition, he is second in passing touchdowns with nine.

Dak and Coop playing with money on their minds for the 3-0 Cowboys.

Like Prescott, Ezekiel Elliott is proving his worth through his play. On Sunday, he rushed for 125 yards on an impressive 6.6 yards per carry. Zeke currently sits at fourth in total rushing yards with 289 this season.

Amari Cooper appeared uncoverable to the Miami Dolphins’ secondary on Sunday as he racked up six receptions for 88 yards. In addition, Cooper managed to find the end zone twice, leaving him tied with Julio Jones and T.Y. Hilton with a league-leading 4 touchdowns on the season.

In the offensive scheme, Cooper has been Prescott’s favorite target. He led the Cowboys with seven targets against the Dolphins. A team-high 21 total targets have been thrown at Cooper in the 2019 season thus far.