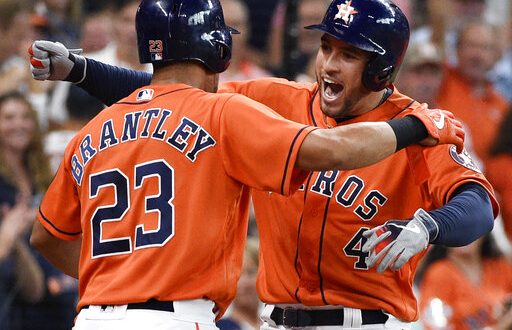 The Houston Astros earned the American League West division title for a third consecutive season and their ninth title overall. This is their longest winning streak since 1997-99.  The Astros secured the title after defeating the Los Angeles Angels 13-5 Sunday night.

The Astros now have a 102-54 record, tying with the New York Yankees for the most wins. They also have 60 wins at home, joining the Yankees as the only two teams to achieve this in the last 40 years.

After the game, Astros manager AJ Hinch delivered a speech to his players celebrating their victory. He also talked about his current achievements and the ones they are fighting for.

Although they are celebrating their third consecutive title, the Astros are keeping their focus on their next goal. Right-handed pitcher Justin Verlander says that they are getting ready for what’s coming next.

“So, step one complete. Now we have the divisional round coming up and we’ll … prepare for that and try to win 11 games.” he said.

All the Astros have left for their regular season are six away games. They start off by facing the Seattle Mariners on a two-game series starting on Tuesday, September 24th. After that, they will be traveling to Los Angeles where they will once again face the Los Angeles Angels.

Outfielder George Springer put the Astros on the board early on the game with a solo homer in the first inning. The longball puts him one shy of the MLB record in lead-off home runs in a season set by Alfonso Soriano in 2003.

Hinch says that this early score helped the Astros boost their confidence about clinching the series.

Springer then got two more home runs in the second and fourth inning. This was a career-high for the 2017 World Series MVP. Springer is hitting .292 with 38 home runs and 94 RBIs this season.

The right-handed pitcher posted his 20th win with the Astros, making him the first Astros pitcher to win 20 games since Dallas Keuchel. With his 20th win, Verlander became the oldest pitcher to reach the mark since R.A. Dickey in 2012. He also leads the AL with a 2.53 ERA.

Camila is a senior at the University of Florida, who served as a beat writer for the women's basketball team from 2019 until the 2021 season. She was also a beat writer for the Gators football team during the 2020 season. Camila is also WUFT's news director as well as a sports reporter/anchor.
@CamilaMaffuz
Previous Monday Night Football: Redskins Host Bears in Primetime Showdown
Next Cowboys Stomp Struggling Dolphins