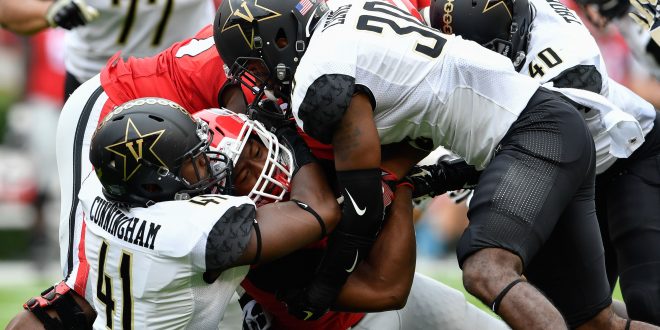 The Northern Illinois Huskies will take on the Vanderbilt Commodores Saturday in week 5 of college football.

The Huskies haven’t looked good this season so far on the road suffering loses against No. 13 Utah and to Nebraska.

Ross Bowers, Tre Harbison and Daniel Crawford are the season leaders for the Huskies so far in the season.

Quarterback Bowers, has thrown for 776 yards, 3 touchdowns and 3 interceptions on 61.3% passing.  Harbison leads in rushing yards for the Huskies with a total of 162 yards, while Crawford leads in receiving yards totaling at 195 yards. Defensively for the Huskies, Antonio Jones-Davis and Jordan Cole lead the team in tackles, each having 16. Collectively, the Huskies average 347 yards offensively scoring an average of 16.3 points per games while allowing 390 yards of total defense and 29.7 points per game so far this season.

While the Huskies look to win their first away game, the Commodores look to take their first victory of the season at home Saturday. They are coming into this game after losing to ranked No. 4 LSU, 66-38.

Season leaders for the Commodores are Riley Neal, Ke’Shawn Vaughn and Kalija Lipscomb. Quarterback Riley Neal so far this season has thrown for 669 yards, three touchdowns and two interceptions on 58.2% passing. Vaughn leads the team in rushing yards having a total of 260 yards and three touchdowns on the ground, and Lipscomb leads in receiving yards with 16 catches for 174 yards. Dashaun Jenkins will be a defensive threat to Northern Illinois. Jenkins so far this season has 25 total tackles, with 15 of them being his solely. As a whole, Vanderbilt averages 363 yards offensively scoring an average of 22.7 points per game, while allowing 541 yards of total defense and 46 points this season.

Northern Illinois will take on Vanderbilt this Saturday. Kickoff will begin at 12:00 p.m. at the Vanderbilt Stadium.

Announcing your Huskie captains for this Saturday's game as we take on the Vanderbilt Commodores at 11am CT on the SEC Network! #TheHardWay #GameWeek #MACtion pic.twitter.com/vqR51h0wTd