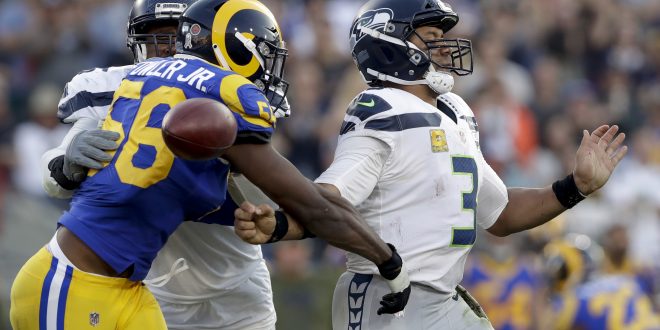 Rams Travel to Seattle Looking to Move Past Crushing Upset

A feeling of immense disappointment filled the guts of every single member of the Los Angeles Rams on Sunday. They walked off their home field with their heads down, as the heavy underdog Tampa Bay Buccaneers came away with a 55-40 victory, crushing their hopes of a second straight 4-0 start to the regular season. The Rams try to get back in the win column when they head to Seattle to face the Seahawks.

Many critics have been quick to call out head coach Sean McVay. His lack of balance when calling the offense has been noticeable, especially on Sunday when quarterback Jared Goff threw the ball 68 times, while superstar running back Todd Gurley only had five carries all game. However, McVay isn’t so much worried about the balance as he is the efficiency of the offense.

Despite the lack of balance, Los Angeles still finds themselves in a good spot with a 3-1 record. Seattle comes into the game with the same record.

The Seahawks had a more positive result this past Sunday however, beating the Arizona Cardinals 27-10. And though they fell at home in a game which they were heavily favored, the Rams are still one of the best teams in the NFL. Seahawks head coach Pete Carroll knows this too. Seattle won’t take the Rams lightly, and this test will only prove what kind of team the Seahawks are.

With the San Francisco 49ers off to a hot 3-0 start, a win tonight for both teams is critical. They both want to keep pace in a competitive NFC West division, and a win tonight ensures that. A loss for either knocks them down to 3-2, with quite the latter to climb to overcome the other two teams ahead of them in the division. And both teams are fully aware of it.

The stage is set for a brutal, competitive divisional match on Thursday Night Football. A loss for either is crushing, while a victory is more than uplifting.