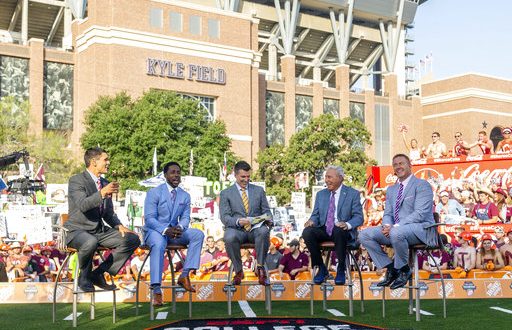 FILE - In this Sept. 8, 2018, file photo ,ESPN College Game Day's crew sits on set in front of Kyle Field in College Station, Texas. before the start of an NCAA college football game between Clemson and Texas A&M. After 15 years of the Washington State flag begin a backdrop fixture to every “College GameDay” broadcast, ESPN is going to Pullman Wash., on Saturday.(AP Photo/Sam Craft, File)

If you haven’t heard yet, and I really hope you have, ESPN’s College GameDay is in Gainesville for Saturday’s big matchup between seventh-ranked Auburn and 10th ranked Florida.  It’s been seven years since the GameDay crew has been in Gainesville. However, college football’s flagship television program is excited to be back in Gator Country.

With the faces of college football on campus at the University of Florida, the campus is buzzing as Saturday’s showdown is shaping up to be one of, if not the biggest game, in nearly a decade.

Ahead of the matchup, College GameDay’s hosts gave their thoughts on the SEC battle.

Davis is no stranger to the college football scene. He’s been in the business with ESPN since 1995. So, when he speaks, he speaks from experience.  To kick things off, Davis is a big fan of Florida coach Dan Mullen as he gushed over him in calling him one of the most underrated coaches in college football.

Davis said that Saturday’s gave presents Mullen with a great opportunity to prove himself in a game that carries significant conference implications.

The final thought from Davis is whether or not Florida’s offensive line can compete with Auburn’s elite defensive front in perhaps the biggest question mark of the game — a question mark that Florida will need to find an answer to if they want to come out with a win.

Next to talk Florida-Auburn is a guy who knows the Gators fairly well. Pollack played his college career at the University of Georgia in 2001-2004.

For Pollack, one of the most interesting aspects of Florida’s football team is the sudden change at the quarterback position. After Feleipe Franks went down with an injury in the third quarter of the Kentucky game, Kyle Trask has stepped into the starting role — a situation that hasn’t looked all that bad.

Pollack expects Mullen to manufacture his way to find success on offense. Pollack believes this game will look a lot like the Gators’ approach to Mississippi State last year — lots of quick passes and a sprinkle of trick plays.

On the flip side, the former Bulldog believes Florida’s speedy defense matches up well with the Auburn offense and how Gus Malzahn likes to call plays that slowly develop.

The thing that’s a good match up for Florida is that Florida has speed. Auburn likes to do the zone read game, Auburn likes to do the quarterback run around the corner. Well, that makes the defensive ends play slow and play the running back first and then react to the quarterback. Well, those guys are athletic enough where they can play the run and still chase down Bo Nix.

The final voice on the slate is former Michigan Wolverine wide receiver Desmond Howard. Howard, who is a big name in the Big 10 conference, is excited to be in Gainesville covering Saturday’s SEC showdown.

In Howard’s eyes, the Gators are edged by the Tigers in almost all facets of the game. However, he feels that if the Florida defensive front can get after freshman quarterback Bo Nix, then Florida could generate some magic in The Swamp.

We will see who was right and who was wrong come Saturday afternoon at 3:30. Until then, catch Kirk, Corso, Rece, Des, David, and Maria on Saturday morning live from Gainesville at 9 A.M.

Ainslie is a journalism major at the University of Florida where she specializes in Sports Media. Her main passion is college football as it was a huge part of her childhood. Ainslie serves as a current correspondent for the Ocala Star-Banner, a newspaper for the Ocala, Florida area. She currently covers Marion County high school sports.
Previous P.K. Yonge Holds off Taylor County to Win Close One, 19-13
Next Gonzales’ Four Touchdowns Lead Oak Hall to 34-14 victory over Bell