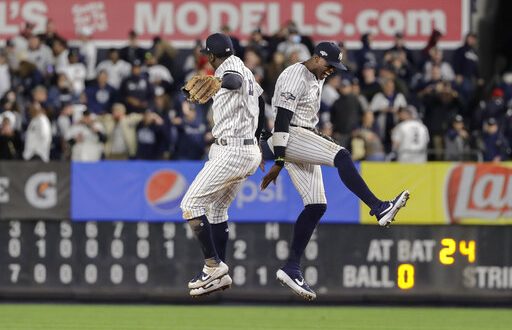 Preview: Yankees Look to Close Out the Twins

The New York Yankees are one game shy of sweeping the Minnesota Twins in the race for an AL Division Championship Series spot. Heading into tonight’s matchup with a 2-0 game lead over the Twins, the Yankees have a familiar feeling. Previously in 2009 and in 2010, the Yankees swept the Twins 3-0. In addition, they beat them in the 2017 AL wild-card game.

Luis Severino will take the mound for the Yankees. Severino will add a sense of freshness to the Yankees lineup as he did not make his season debut until Sept. 17. The right-hander spent a majority of the regular season rehabbing an injury from spring training. Severino has pitched just 12 full innings this season.

For the Twins, Jake Odorizzi will try to help his team fight their way back from a 0-2 deficit. Odorizzi got the starting nod for tonight’s game after being passed over on Saturday night for rookie Randy Dobnak. Statistically speaking, all hope is not lost for the Twins going into a crucial game three. Minnesota only suffered one three-game losing streak all year. They also recorded the most home runs in the MLB this season with 307.

In addition, Twins manager Rocco Baldelli also agrees with Dobnak that their team isn’t finished yet. Baldelli claims his team is fueled with the fight and hasn’t lost sight of the job at hand. The Twins will continue to prepare the same way they have been since spring training. They don’t plan on changing their preparation or the way they handle business in order to secure a win tonight.

As for the Yankees, manager Aaron Boone said his team is ready to bring the heat into Target Field tonight. Boone said he is also excited to see Severino get back to the mound and pick up right where he left off.

Game three will start at 8:40 ET at Target Field in Minneapolis.
Share