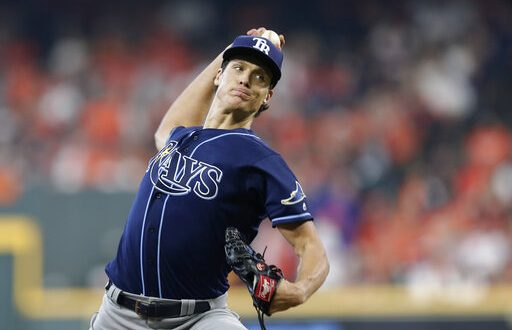 For the fourth time this postseason, the Tampa Bay Rays will be trying to keep their season – and their World Series hopes – alive.

They did it against the Oakland A’s in the Wild Card Game, and they already accomplished that feat twice against the Houston Astros with a pair of home victories by a combined score of 14-4.

Game 1 could be summed up with one name: Justin Verlander.

Verlander blanked the Rays in seven innings pitched, gave up just one hit, walked three and struck out eight. For the Rays, starter Tyler Glasnow held his own for four innings until the Astros scored four in the fifth inning. They tacked on two more off reliever Oliver Drake to make it 6-0.

Tampa Bay got a couple of runs back in the bottom of the eighth. But it was too little, too late, and the Astros won 6-2.

Game 2 went much like Game 1. Except it was Gerrit Cole on the mound for Houston.

Cole fanned 15 Tampa Bay batters across 7.2 shutout innings. The Astros did just enough offensively in a 3-1 win to take a stranglehold on the series.

In front of their home fans in the postseason for the first time since 2013, the Rays’ offense finally woke up in Game 3. Though the Astros took an early 1-0 lead on a Jose Altuve home run, the Rays pounded Houston starter Zack Greinke for six runs in 3.2 innings. Tampa Bay crushed four home runs in the game, and Charlie Morton allowed just one run in five innings in the 10-3 win.

The Rays got a rematch against Verlander in Game 4. And this time they got the upper hand on him.

Tampa Bay registered three runs in the bottom of the first against the Astros’ ace, including a solo home run from designated hitter Tommy Pham. The Rays extended the lead to four when shortstop Willy Adames smacked a solo shot in the bottom of the fourth. Verlander only made it through 3.2 innings before getting pulled.

A combination of six Rays pitchers effectively shut down the Astros in a 4-1 win to even the series. No pitcher threw more than 2.1 innings in Game 4.

The Rays were massive underdogs heading into this series. Wild card teams aren’t supposed to hang with those who win 107 games.

Yet, the Rays have taken the Astros the distance. The pitching has held up against a talented and deep Houston lineup. The offense did its part at home against arguably the deepest rotation in the league.

Glasnow is back on the mound tonight to start for the Rays. He’ll be going up against likely AL Cy Young candidate Gerrit Cole. Glasnow’s start in Game 1 was his first career postseason start, and the Rays will need a better performance tonight.

The key for the Rays tonight will be their offense. Their pitching has been solid all year long (3.65 ERA in the regular season, first in the AL), but the offense only scored two runs in the first two games in Houston this series. The Astros’ lineup is loaded with bats like Alex Bregman, Altuve and George Springer.

Pham, Adames and Yandy Diaz have combined for six home runs in this series. No player in the AL has hit more than two in the postseason this year. That is the kind of offense the Rays will need tonight.