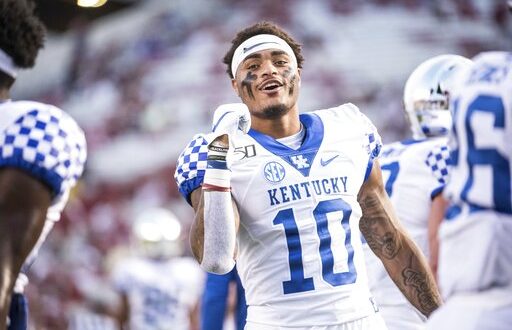 Two SEC Conference rivals will square off Saturday night when the Arkansas Razorbacks travel to Kroger Field to face off against the Kentucky Wildcats.

What seemed like a promising season for the Wildcats is just coming to shreds. The Wildcats are now riding a three-game losing streak and will look to turn things around against Arkansas. Arkansas has lost 13 SEC games in a row. The Razorbacks are 0-10 in the SEC under head coach Chad Morris.

With Terry Wilson’s season-ending injury, the quarterback situation in Kentucky has been rough. Sawyer Smith has been taking a beating with three injuries already (shoulder, wrist and a lower-extremity issue). Smith looked like a decent replacement for Wilson against Florida. Besides the three interceptions, he threw for two touchdowns and rushed for one. However, Smith has since completed just 23 of 73 passing attempts in two games.

When Smith went down against Mississippi State, Kentucky turned to wide receiver Lynn Bowden to go under center. Kentucky’s coaching staff has expressed a desire to start Smith this week. Smith is still listed as the No.1 option on the depth chart, but he has been limited in practice. Bowden took most of the reps with the first unit in these last two weeks.

The most exciting thing about the Wildcat offense is their ground game. With the three-headed monster featuring A.J. Rose, Kavosiey Smoke and Chris Rodriguez, they were electric to start off the season. All three of them have hit a roadblock in their last two contests but they will look to regain their momentum against this Razorback defense.

Looking at the other side, the Wildcat defense is doing a solid job. The Gators were able to get enough out of Feleipe Franks and Kyle Trask to hit the 300-yard mark, but the UK secondary hasn’t allowed a touchdown pass in the last two games. The Wildcats have allowed just three passing touchdowns all year.

After coming up short against Texas A&M, the Razorbacks will be traveling to Kroger Field looking to make a statement.

For Arkansas, the quarterback position has been shared throughout the season by a pair of graduate transfers, Nick Starkel (Texas A&M) and Ben Hicks (SMU). Hicks (36-of-72 passing for 429 yards with one touchdown and no interceptions) started the first two games.  Hicks then lost the job to Starkel (81-of-131 for 1,019 yards with seven TDs and seven picks). However, Starkel left the game against A&M early. Hicks came in and almost lead the Razorbacks to an upset. Starkel is set to go under center on Saturday, but don’t be surprised if the Razorbacks throw in Hicks for a couple of snaps.

Through five games, Razorback running back Rakeem Boyd has been sensational. He has 484 yards and three touchdowns on 91 rushes.

There is some young talent in this Razorback offense. However, the key for Arkansas is defense. When the defense is making stops and creating big plays, the offense can take care of the rest. With the way Kentucky’s offense has been struggling, the Razorbacks should be looking to be aggressive and generate turnovers.

Saturday in Lexington.
60 minutes or as long as it takes.#WPS pic.twitter.com/mxZN2a4HWs

Kentucky vs. Arkansas will take place on Saturday, October 12 at 7:30 pm E.T.