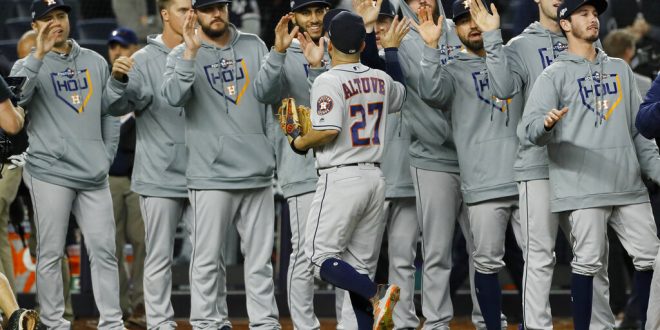 With Game 4 on the horizon, the Washington Nationals await the series winner in the World Series.

The Astros beat the Yankees 4-1 in Game 3. Houston didn’t take long to get an advantage, adding a run in each of the first two innings against Severino.

Jose Altuve got Houston going with a solo homer in the first inning. One inning later, Josh Reddick mimicked his second baseman with a solo shot.

The two home runs proved to be the only two runs Severino allowed in the game. He lasted 4.1 innings before being taken out.

Gerrit Cole got the start on the mound for Houston. Like Severino, Cole gave up some hits and walks early on. However, he was able to pitch his way out of tough situations.

In the first inning, Cole allowed two singles to the first two Yankee batters. With two outs and the bases juiced, he got Didi Gregorius to ground out to second.

The Yankees had chances, but they were unable to capitalize. They managed baserunners in four of the seven innings Cole was on the mound and left five runners stranded in scoring positions.

Their struggles continued after Cole left the game. New York nicked a run in the eighth inning via a Gleyber Torres solo homer, but that was all the home team could manage on the night.

Yankees manager Aaron Boone expressed his frustration with the team’s offensive execution in the game.

Game 4 of the ALCS will stay in Yankee Stadium. First pitch is at 8:08 p.m. Wednesday evening.