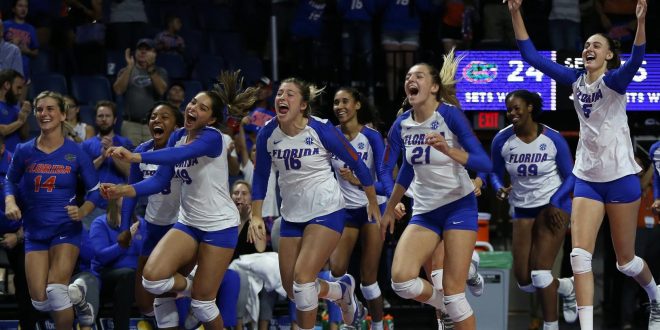 Florida is currently 4-1 against SEC opponents with their sole loss happening on the road to No. 15 Kentucky.

Florida Making a Presence at the Net

A notable strength for Florida volleyball has been their effectiveness at the net both offensively and defensively.

As a team, the Gators rank 14th in the country in blocks per set with an average of 2.79. Furthermore, this average ranks the Gators first in the SEC.

Middle blocker Lauren Dooley earned SEC Defensive Player of the Year after her performance this past weekend. Dooley combined for a total 17 blocks against Arkansas and Texas A&M.

Additionally, Dooley leads the Gators with a total 60 blocks on the season.

Offensively, right-side hitter Holly Carlton and outside hitter Thayer Hall have led the Gators at the net. Hall leads Florida with 214 kills on the season.

Hall commented on the momentum that Florida has as they prepare to face South Carolina.

Additionally, Carlton records 133 kills and 43 blocks on the season. Carlton highlights how the Gators have been focusing on offensive strategy.

A Look at South Carolina

The South Carolina Gamecocks (11-7) are coming off of a five set victory over Arkansas.

South Carolina looks to carry their momentum into their match-up against the Gators. Both offensively and defensively the Gamecocks are led by middle blocker Mikayla Robinson and right side hitter Mikayla Shields.

Not only have we not seen this happen in the modern era, but the #Gamecocks have only had multiple double-digit block performances in the same SEASON three times since '01. pic.twitter.com/uj4Wh8nSqi

Robinson poses as both an offensive and defensive threat to opponents. On offense, Robinson is one of Gamecocks strongest hitters, recording a hitting percentage of .337.

Additionally, Robinson leads South Carolina with 70 blocks on the season.

Florida will take on the South Carolina Gamecocks at 8 p.m. at Exactech Arena on Oct. 16.