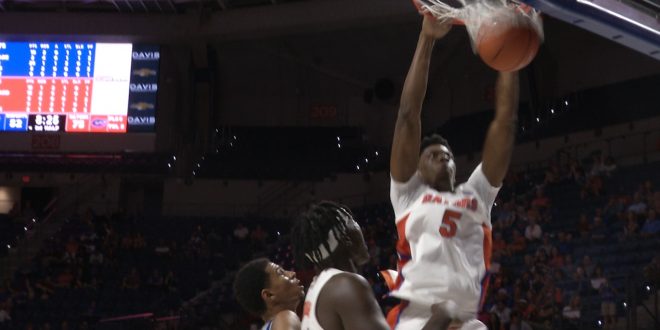 The Florida Gators Men’s Basketball team defeated the Lynn Fighting Knights 89-71 in an exhibition game at the Stephen C. O’Connell Center on Tuesday.

Point guard Andrew Nembhard led the team in scoring with 17 points. He tacked on six assists and four rebounds to go along with an efficient performance.

Forward Kerry Blackshear Jr. had 16 points and 10 rebounds. A graduate transfer from Virginia Tech, the 6’10” forward showcased his experience and talent.

Additionally, Blackshear made many smart decisions with the ball. This led to better shots later in the shot clock. Things like that only come from experience, which Blackshear brings to this Gators team.

#Gators @kjblack15 has shown in this exhibition that he can play the glass. He uses his size well and can move in the air to finish strong.

His leadership was felt throughout the game as head coach Mike White had four freshmen in at times with Blackshear as the leader on the court.

Mike White made it a point of emphasis to get his freshmen involved early.

Guard Tre Mann, who saw the starting lineup, played 29 minutes and contributed to the offense. He showed an ability to shoot and get the ball to players like Blackshear when they’re hot.

Mann thinks that this year the Gators are a shooting team.

The Gators shot 14-29 from three-point range and Mann made two threes en route to 13 points.

Forward Omar Payne played 19 minutes and recorded nine points with seven rebounds. He topped his performance off with two put-back dunks that showed his prowess around the rim.

White said that Payne has been continuously getting better every day. According to him, Payne had two great practices coming into this game and is farther along in his development than he expected.

Victory, but much to fix

Throughout the game, the Gators made mistakes that led to success for Lynn. Florida turned the ball over 17 times, which led to 19 points off of turnovers for Lynn.

In Mike White’s post-game press conference, he emphasized that communication on defense is a point of emphasis for them going forward.

According to Nembhard, the team should be playing much better defensively.

Florida gave up 35 points to Lynn guard Jordan Allen, who was 56.5 percent from the field in an efficient performance.

Lynn outscored the Gators 42-40 in the second half. The Fighting Knights looked strong down the stretch with multiple three-pointers courtesy of Jordan Allen and poor perimeter defense from Florida.

A lack of chemistry between the different lineups contributed to the defensive issues plaguing the Gators late in the game.

According to White, the issues on defense are why you play an exhibition game. White says the minute rotation will get more refined as the season gets underway.

Additionally, The defense should improve as players become more comfortable with one another and their rotations.

The Gators host the University of North Florida on Nov. 5 at 7 p.m.

Steven Walker is a beat writer for ESPN Gainesville and is currently studying Journalism & Sports Media at the University of Florida.
@swalker_7
Previous Verlander, Astros Look to Take World Series in Game 6
Next Nationals Force Game 7 in World Series