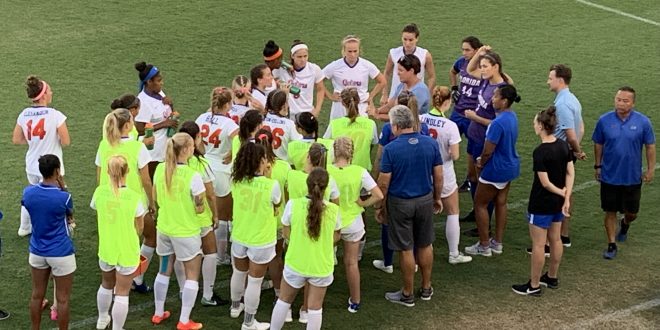 The Florida soccer team closed out regular season play on the road at Georgia Thursday evening. It took 88 minutes for the breakthrough as the hosts collected all three points for the first time in over a decade as Georgia wins 1-0.

Temperatures were quite low compared to what the Gators have recently experienced in Florida. During the match, it reached as low as 45 degrees.

In the closing minutes of the game, neither Florida nor Georgia had mustered a goal. Florida continued to push until the very end. However, trying to play out from the back ended up costing them dearly.

Georgia Eaton-Collins attempted to play the ball to Parker Roberts in the midfield when she was marked tightly by Abby Boyan. As a result, Boyan read it and intercepted, dribbled up, then played a killer through ball to Haley Sorrell.

Sorrell did well to shield the ball from Carina Baltrip-Reyes on her left and finished coolly with her right into the bottom-right corner.

Thursday’s game marks the third-straight match without a win for Florida. Last time out, they drew with South Carolina on Senior Night.

The Gators outshot the Bulldogs 11-8. However, Georgia put six on target to Florida’s five.

Both Susi Espinoza and Emory Wegener had solid showings in goal. Espinoza and Wegener picked up five saves each in the match.

After making 7️⃣ saves against No. 6 Arkansas, Emory Wegener is the @SEC Defensive Player of the Week‼️

With the loss, the Gators now have an overall record of 30-3-1 against the Bulldogs.

When the day began, it was possible for a four-way tie for first place in the SEC. However, it was Arkansas who retained their lead with a 3-1 win over Tennessee to secure the conference title.

South Carolina finished first in the SEC East with 24 points. With Thursday’s loss, the Gators finished tied for second with Vanderbilt with 19 points.

Now that the regular season is over, it’s time for conference tournaments. For the Gators, that means a potential deep run in the SEC Tournament.

Florida got a first-round bye and will face Texas A&M in the quarterfinals. The Gators defeated the Aggies 3-1 earlier this season in Gainesville.

That match will begin on Tuesday at 8:30 p.m. For the full SEC Tournament bracket, click here.