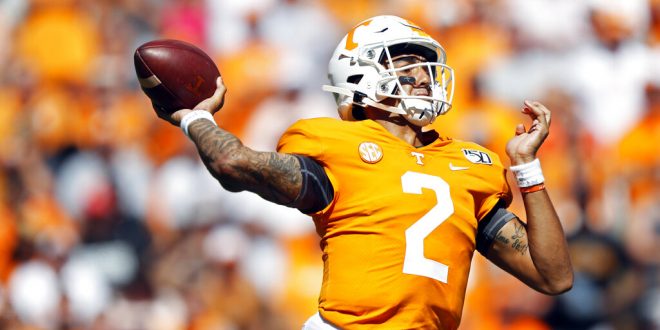 Tennessee will welcome the UAB Blazers to Neyland Stadium for their 96th homecoming game in team history on Saturday.

The Volunteers are 73-19-3 all-time on homecoming and are looking to better that record against their final non-conference opponent of the year.

Here’s what to look out for when these two teams face off at 7 p.m. on ESPNU.

Both Tennessee and UAB will field versatile runners in their matchup on Saturday.

UAB runs the definition of a running back committee. The Blazers already have four active players who have at least 200 yards on the ground this year. Spencer Brown, their leading rusher, has notched 262 yards this season.

The Vols have a lead back in their stable, but they still like to share the ball in the backfield. Ty Chandler leads the Vols in rushing with 500 yards through eight games. He also has two touchdowns.

Tim Jordan and Eric Gray have also received significant snaps, however. Both runners have over 200 yards rushing this season.

Defense Will be Key

Tennessee and UAB are both coming off of solid defensive performances.

The Vols defense is led by linebacker Daniel Bituli.

The senior registered 15 tackles in Tennessee’s win last week and blocked a punt and recovered it in the end zone for six against South Carolina.

Tennessee only allowed 21 points to the Gamecocks last week and shut them out in the second half.

The Blazers are ranked 5th nationally in total defense, and they have not allowed more than 20 points in a game all season.

However, the Blazers will face a tougher challenge against an SEC opponent in the Vols.

UAB is led by a defense surrendering 15.7 points per game. It has not allowed more than 20 points in any game this season. https://t.co/LkB1BuXo77

Both squads are entering their last non-conference games of the season.

UAB will stay on the road next week when they travel to Hattiesburg to play the Southern Mississippi on Nov. 9 at 3:30.