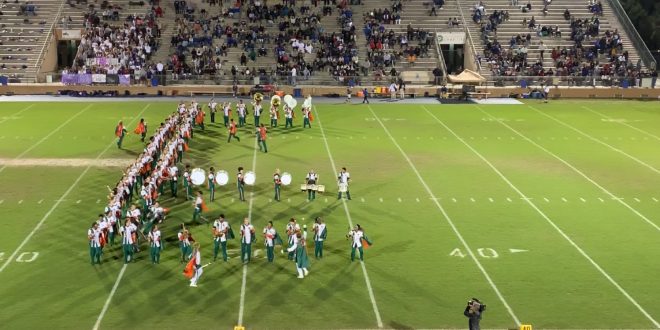 Friday night’s Eastside-Gainesville game marked the end of the 2019 season for both teams as neither team had a shot at the playoffs. The bands joined together during halftime in a joint performance to celebrate their seasons. Each team played their hardest in an effort to end the season on a high note.

The first half was an exciting half. There were eight plays for more than 20 yards in the half that ended with a score of 17-12 in favor of Gainesville High School. The first half for Eastside was highlighted by a 94-yard touchdown drive in just 29 seconds to end the half ending in freshman quarterback Holden Johnson connecting with tight end Christopher Burwell for their second touchdown of the game.

Throughout the first half, Eastside’s run game was almost nonexistent. They amassed just seven yards on the ground in the second quarter after not gaining a single rushing yard in the first quarter. Conversely, Holden Johnson threw well, going 8 of 14 for 145 yards and two touchdowns. Eastside’s Jahren Phillips played well on defense in the first half gathering four tackles and a sack.

For Gainesville High, KZ Hutchinson was the player of the half. Hutchinson had a 75-yard rushing touchdown and a 50+ yard punt return in the second quarter. Also, senior defensive back Michael Cromarty was stellar, making life tough for Eastside’s running attack.

Halftime score: @Canesville1900 17, @EHSRamsFootball 12 after Christopher Burwell’s second receiving touchdown of the game. KZ Hutchinson has been tearing it up for Gainesville High. We’ve got a ball game on our hands. @ESPNGainesville @SunPreps @ThePrepZone

The second half was almost exclusively the Gainesville Hurricane show. Its offense stayed strong as KZ Hutchinson got a second rushing touchdown. Quarterback Jacob Hanson also got in the end zone for a rushing touchdown.

Eastside’s offense looked as if it was destroyed in a hurricane. Holden Johnson’s run of great play ceased in the third quarter as he threw two interceptions and very few yards. The Rams offense finally started to show signs of life in the fourth quarter, but it was too late as the Gainesville won the game 31-18 with KZ Hutchinson putting on a clinic on offense and on defense.

Post-game Eastside Coach Cedderick Daniels talked about some positives from the season and what injured quarterback Anthony Richardson and the seniors meant to this Rams football team.

A positive Coach Daniels found in the season,

“A lot of young guys got a lot of reps for the season, in particular our quarterback.”

“In my eyes, it makes us better next year, you know, he [Holden Johnson] already has 4 or 5 games under his belt, so he’s gonna be 4 or 5 games ahead of schedule.”

When talking about his seniors, Daniels says,

“Aw man, those kids are going to be hard to replace, you know, like I was just telling them, they were the foundation of the program”.

As a whole, this season was a learning experience for the Rams football program as they went just 2-8 and missed the playoffs, but their coach is optimistic about the program next year.

Jensen Young is a journalism student at the University of Florida. He works as a sports writer for WRUF.com and is the voice of trendings on Wednesday mornings on the WRUF radio station.
@Jensen_Young9
Previous Gadsden County Stuns Hawthorne on Football Senior Night 17-10
Next Ty Corbin’s Four Touchdowns Lead Chiefland Past Williston 42-8